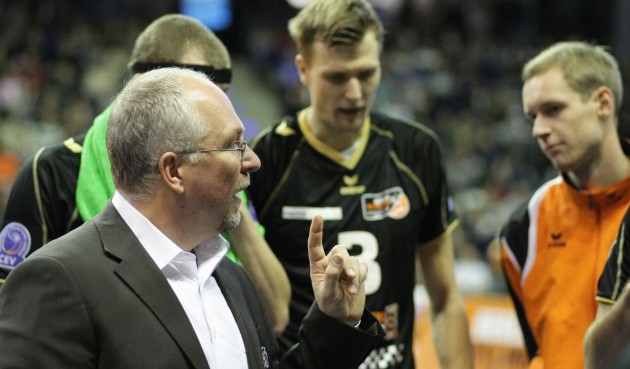 – After three weeks how would you evaluate this season so far?

– We can be pretty satisfied by now. We’ve managed the most important and difficult matches in the first half of this campaign against FRIEDRICHSHAFEN and UNTERHACHING and we also started solidly into the Champions League season. We have progressed continuously from match to match and showed our best performance last week as we took on Lokomotiv NOVOSIBIRSK.

– By now you’ve played two matches a week. What are the challenges of playing three different contests?

– The major challenge is the time aspect; the matches come thick and fast. The travel strain is not comparable to what we’ve experienced so far. Sometimes we travel for five days in a row, don’t come home but play two or three matches on one trip – that’s something we’re not used to. But for now, the team does pretty well.

– Last Wednesday you played Lokomotiv NOVOSIBIRSK and three days later VC DRESDEN, a team that was just promoted to the first division of the Bundesliga. How do you motivate your team in apparently easy matches?

– For matches as the one against NOVOSIBIRSK you don’t need any special strategy to motivate the guys, everybody gives 100 per cent. It’s always important to focus on the next match, that’s what I try to pass on to my team. Bearing in mind that you should always keep your own level – no matter which team you play, the less demanding matches won’t be any problem.

– In the national cup, you’re facing Generali UNTERHACHING tomorrow. What do you expect from this match?

– It’s going be a tough fight for us. Although we have already won against them this season, we’re going to start from the scratch and have to give our very best to succeed. However, the victory has raised our self-confidence and we want to make it to the next round.

– Next Tuesday you’re facing Budvanska Rivijera BUDVA. What do you expect from this year’s CL campaign?

– We demonstrated that we’re able to play at a very high level. Although we lost the match against NOVOSIBIRSK, we showed a very good performance. Our goal still is to make it to the Playoffs and we have a good chance of succeeding.