Generali UNTERHACHING hosted for the second time this season German champion BERLIN Recycling Volleys in a clash of two 2013 CEV Volleyball Champions League competitors. After an away match at TV ROTTENBURG in the Bundesliga, UNTERHACHING will resume its European campaign and host Lube Banca Marche MACERATA for the third leg of prelim Pool D play next Wednesday, November 14. 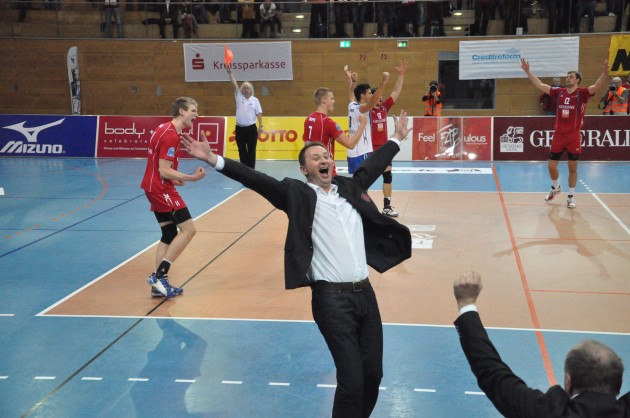 UNTERHACHING’s head coach Mihai Paduretu had declared the match as “probably the most important game for us until the end of 2012. You can live with a loss in the league. A loss in the cup means your dreams of reaching the finals are over”, he said prior to the encounter at Generali Sportarena. So the spectators saw a real cup-fight with thrilling and lots of emotions contributed by these two top teams.

The hosts got off to a better start, pulling away after the second time-out in the first set. Paduretu was able to welcome back middle blocker Matias Raymaekers who had been freed of the cast on his foot. Raymaekers didn’t have a lot of practice time under his belt but he fit right in. Moreover, Patrick Steuerwald smoothly took over from regular setter Branislav Skladany who got sick.

In the second set the match was even for a long time when UNTERHACHING got ahead by two points (16:14) via two good services by Huib den Boer. However, BERLIN came back and took advantage of a phase when the otherwise brilliant Jan-Willem Snippe, who finished with 24 points, had problems to score.

After losing the second set UNTERHACHING put even more pressure on its opponent with powerful services and attacks that were backed up by good blocking. While BERLIN was still close in the third set Generali dominated the fourth with unexpected ease. No wonder captain Christian Dünnes was satisfied: “It was a very attractive match and we still want to make the best of it in this competition”.

A happy head coach Paduretu was in a good mood as well after the match. “For the third time in a row we have now eliminated BERLIN from the run for the cup. I’m happy with our game. But we won’t celebrate too long”. There is indeed no time to soak in the prestigious win against the German champion who stole the championship last season with a win in the deciding fifth game of the finals at Unterhaching after saving two championship points. After an away match at TV ROTTENBURG in the Bundesliga, UNTERHACHING will resume its European campaign and host Lube Banca Marche MACERATA for the third leg of prelim Pool D play next Wednesday, November 14.