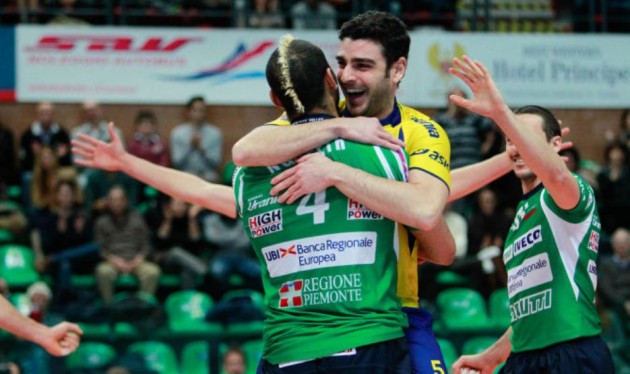 Wout Wijsmans (Bre Banca Lannutti Cuneo): “We have to be happy with this victory, three points are important for us. We are going well and we continue on our way. Now we have to overcome Ljubljana, it depends only on us, and then look forward to the championship. We have lost many points, but we no longer think about it and focus on the next game.“

Massimiliano Giaccardi (2nd coach Bre Banca Lannutti Cuneo): “It ‘was a great game and we bring home another three very important points. We started slowly, but then we redeemed. We were very determined, especially in the third set, in which we saw a team that did not want to give up.“

Salvatore Rossini (Andreoli Latina): “We suffered in reception, they had very good service. The best team won, we have tried. We have prepared well for the game, but then there are players in the field like Grbic who saved some impossible balls. I think we lost some points on the road, this is not the game in question, but we’re pretty happy with the season we are having.“

Daniele Sottile (Andreoli Latina): “Too bad, because it was a balanced game. We missed the extra boost in the finish of the sets. A few balls have made a difference. They were better at closing and have been more lucid in the important moments.“