Italy: Jarosz led Latina to the victory over Cuneo

In the Italian Serie A1 another round full of surprises. 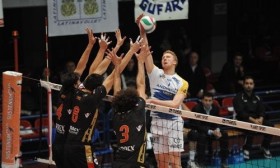 Jarosz led Latina to the victory over Cuneo

The best performance of Jakub Jarosz.

A dour defeat in Verona last weekend, Andreoli Latina has compensate with a victory over the second team of the last season, taking advantage of absence of injured Nikola Grbic and Luigi Mastrangelo.

It was a game on a high level, with many blocks and personal aces from both sides.

An incontrovertible hero of the match is a Polish spiker, Jakub Jarosz, awarded the MVP title.

In Cuneo the best scorer was Leandro Vissotto with 24 points and 49% in attack.