Italian girls scored yet another straight sets victory, this time over nervous Cuban side. With this win, Italy kept themselves in contention near the top of the Grand Prix standings. 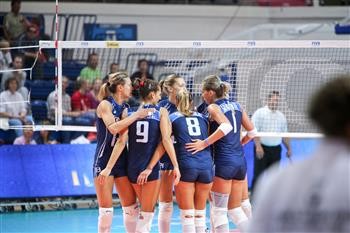 It was a rather easy win for the Italians, who proved to be too strong for Cuba. Italy went 8-5 ahead in the first set thanks to the attacks of Indre Sorokaite and captain Martina Guiggi. Melissa Teresa Vargas Abreu was by far the Cuba’s best individual, but her teammates made too many mistakes, and from 16-13 up, Italy powered forward to win the set 25-16.

In the second period, the Cuban side continued to make mistakes, and Italy led 10-16, again holding their advantage, with Valentina Arrighetti adding heavily to the scoring. Once again Italians easily pushed to the end of the second set, winning 25-16.

In the third set Cuba got their act together and went ahead 5-3, but Italy quickly asserted themselves, getting 16-14 ahead, and remaining in control to the very end winning 25-20. Once again, Cuba’s mistakes made them pay with yet another loss.

Valentina Arrighetti and Indre Sorokaite got ten points each for Italy, while the match’s top scorer was Cuba’s Melissa Teresa Vargas Abreu, with 14.

1,100 fans saw the match at the Divs Uralochka.

Italy is fourth in the Grand Prix standings, Cuba – who have now lost their last ten matches in a row – is 19th.

See the profiles of Italy and Cuba.