MONZA - A little more than twenty-four hours to kick off the Italian Super Cup tomorrow night at 20.30 (direct Rai Sport 1) in Monza PalaIper, between Norda Foppapedretti and Bergamo Italian Champion in charge and MC-Carnaghi Villa Cortese, the winner of the 2011 Cup of Italy A1. 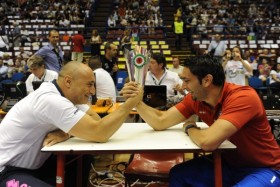 MONZA IN PINK – A challenge in the challenge. Colored pink on the court the two teams vying for the umpteenth time a trophy after thrilling five races last season needed to assign to Scudetto and the Cup finals in Italy in 2010 and 2011.

Bergamo and Villa Cortese come to the great event after qualifying for the Champions League; Quarter-final opponents will be in such a double fratricide that is the access to the Final Four in Baku.

INFINITY CHALLENGE – A duel had already infinite starter in the league last Sunday, when the two teams had faced each other in the match between Castellanza prevail 3-0 on the court of  Villa Cortese, and that will pass through the  important event tomorrow night for Italian Super Cup. No problem of training for two coaches Abondanza and Mazzanti who should propose six players tested in a contest between two teams of absolute value, which promises to be once again exciting.

PREVIOUS – Seventeen challenges between the Championship and Cup Italy between the two formations: 10 victories of Villa Cortese, 7 of Bergamo, the last being last Sunday on the sixth day of the regular season with the return game of golden-blacks who beat 3 – 0 Villa at home, thus avenging the 0-3 in the first return game suffered at PalaNorda. During the last match in Final Scudetto, Bergamo won by 3-2, the two teams had already disputed title in the finals of the Cup Italy 2010 and 2011: in both cases success and trophy went to Villa Cortese. In 2009/2010 season the two teams crossed their destinies in the Play Off semi-finals when Villa Cortese prevailed winning the series 3-1, while in the regular season in the last two championships  the two clubs split the victories: the success of both clubs in 2009/10 and in 2010/11.

TWO SPECIAL TEAMS – The story of two teams in the Italian Super Cup. In its history, 10th Super Cup  won Bergamo, and with five victories, is the team that won the trophy several times, and  is also substantiated by the record number of consecutive statements, four, achieved thanked to poker victories got between 1996 and 1999. The second participation in Super Cup Villa Cortese thanked to the successes in the last two seasons in the Italian Cup. In the last edition of the competition the team trained by Abondanza was defeated with 3-0 by Scavolini Pesaro in Pavia.