BELLUNO - All good things come ... Emanuel Kohut in the two previous Cup Final Four in Italy who played with the golden-black shirt has reached the semifinals at most, and both times Sisley had been eliminated from Cuneo. 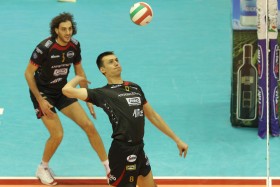 “Now things have to change – said sarcastically Slavic center born in 1982 -. Already getting to the final in Rome would not be bad. Cuneo is already eliminated; letting them have sent us out, for me is a pebble in the shoe, I’ve already taken. However, it remains to remove a pebble in the shoe, called Trento. The power of the champions of Italy is known: we will try to cover our attackers Juantorena and Kaziyski. We will serve with reason and tranquility; with concentration in return ball and of course with great quality and strength. The match caused quite a headache to Santo Stefano of Belluno: we played a good game, the third long set, and did not take a golden opportunity. Patience: the opportunity we intend to take on Saturday. “

Sisley Belluno comes with 5 wins in a row from A1 Series and Cup, a sign of continuity in results.

“Has something changed in the last period in the team? I do not think so. We have always been a great group, connected. Lately we have collected what we had sown in the past and we can still improve. If there had been growth it was the result of a good tactical coach, optimizing our game. Even in the difficult situation, if we reach the correct position we can sense the opponent in the game. There is a great job under certain automatic functions: the strong hits of Bob and Fox (Fei and Horstink, ed) or the blocks of De Togni that allow us do well in the match.”

According to winning scoreboard the second (49) in the A1Men is Andrea Sala (the first Luka Tencati 56), the number 8 of Sisley Belluno will determine what will be in the week for golden-black in the view of the Del Monte Cup Final Four Italy (Pala Lottomatica Saturday 18 and Sunday, February 19).

“The preparation is specific because at the weekend, we will know hypothetically who could be close to two commitments. The goal is to play both on Saturday and Sunday with the highest energies. So this week, like the last, we will collect strength in view of the commitment of the weekend hoping to play two days in a row, which for us will be a novelty. After the victory over Padova we worked out yesterday and today we will return to train with the ball. In Pala Lottomatica we will play with top strength.”

ITA: The Italian Cup on court this weekend!

ITA W: Instead of moving to Japan,...