ITA: The Italian Cup on court this weekend!

This Saturday in Pala Lottomatica in Rome is beginning the 34th edition of the Italian Cup. Who will be the best and bring the Cup home? Let's see... 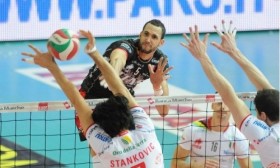 The Italian Cup on court this weekend

Everything starts on Saturday, February 18 at 16.00 when Lube Banca Marche Macerata and Casa Modena will enter on court.

There were 9 previous matches in Coppa Italia between these two teams: 2 in the semifinals (2000/01 and 2002/03) with victories of the team from Macerata, that finished then with the Cup in hands in both editions.

It will be a challenge for Modena, that haven’t played in the final since 1997/98, the year when they won their last Cup.

The second semifinal match will be played at 18.30 between Itas Diatec Trentino and Sisley Belluno. The team from Trento will try to reach their 3rd final in a row. Nevertheless, Sisley is not an easy opponent.

Won 4 matches in 4 last rounds in Serie A1 and was able to beat at home the defending winner of the title, Bre Banca Lannutti Cuneo.

On Sunday, at 16.00, two victorious teams will meet in the Final to fight for a prestigious title and a passport for the next edition of Champions League.

It is to be a great show!