PAST ENCOUNTERS: 66 (52-14 Belluno). Read what Piazza and Zanini said about this game on worldofvolley.com. 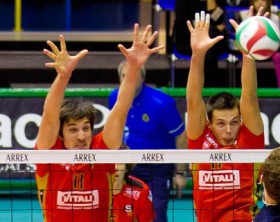 Roberto Piazza (coach Sisley Belluno): “We’ll face a totally different team compared to last week. I expect an open and tight encounter. We have made mistakes against various teams lately, while they seem to be at their best. They’re going through a great moment of form and they had two weeks to prepare the game. As for the rest, there aren’t much difference between us and Monza, especially in terms of point made. Since the first time we met, they added Facundo Conte to their roster, a great player that form a superb partnership with De Cecco. They’ve been playing together for years, in the national team too, they can hurt you with fast balls or from the second line. We’ll try to make it difficult for their setter by serving hard”.

Emanuele Zanini (coach Acqua Paradiso Monza Brianza): “A difficult away game, they are only two points behind us and they managed to qualify for the Italian Cup Final Four, so we perfectly know their worth. In the first leg, they had given us a lesson of volleyball in our gym so we’ll be keen to take revenge although we know it won’t be easy. We needed a rest and time to work in a certain way but at the same time you always lose a little something when you don’t play for 15 days. I think it is impossible to find a team at the top of its form all year long. At times, there are external factors that can influence the game. When we first met Belluno, they played very well, but we had various starters in precarious fitness condition. I am extremely happy to have Tsimafei Zhukouski bask with us, he worked extremely hard to get back on court in record time”.

ITA: Serie A weekend preview – round 20