Interview: Hristo Zlatanov – “Me and my feet are not giving up”

Hristo Zlatanov, the new best scorer in history of Italian Championship, gave an interview for "Gazzeta dello Sport" in which he talked about many interesting things… 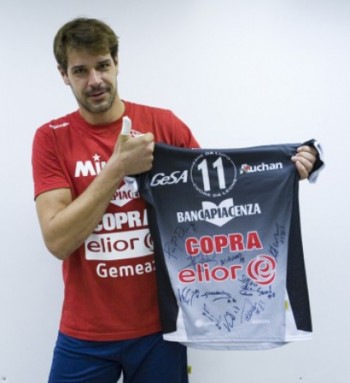 How does it feel to be the best scorer ever in Italian Championship?

Does it mean you are considering to retire?

“Absolutely not! As long as me and my feet continue to feel love towards volleyball we will not give up.”

Do you have favorite point in your career?

“Well, I do not know. Maybe some from the seasons when I won Italian Championships with Piacenza. On the other hand, I remember one which I could have won. It was the final of Champions League in 2008 (Piacenza – Kazan 2-3). Meoni gave me a perfect ball, and I have already thought it was over. But, then I saw hands of Bogomolov… I was dreaming about that point for quite a time.”

What examples did you follow to achieve this kind of record?

“I was lucky to play with famous Generation Phenomenon (national team of Italy during the 90s). They studied the smallest details in volleyball so I learned a lot from them. I was like a sponge, trying to absorb as much I could. Remember that I tried to follow the model of attacking by Luca Cantagalli, and after a lot of effort I managed to almost spike like he could.”

“Fei now plays as a middle blocker so he can’t reach my score (laughs). I didn’t tell management to put him on that position (laughs). As for Samuel… Maybe if he plays until he reaches 50 years… But he is a littlebit crazy, so nothing is impossible (laughs).

What is your next goal?

“Well, next goal is to reach 9000 points obviously… Now serious, for me, the most important thing at this moment is to overcome a group in Champions League with Piacenza – concluded Zlatanov.