Getting to know: Denys Kaliberda

Denys Kaliberda is the rising star of German Volleyball and he definitely could not ask for a better way to start the year 2014. Last weekend he anchored Germany’s national team on their way to three straight victories to qualify for the Final Round of the 2014 FIVB Volleyball World Championship and right upon his return to Italy, together with his team – Copra Elior PIACENZA – he won the “big match” with archrivals Lube Banca Marche MACERATA. 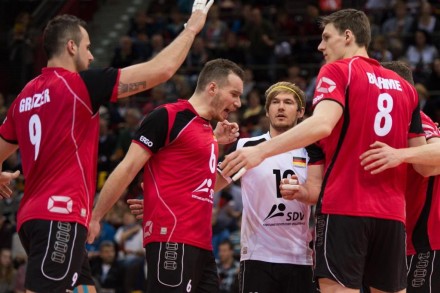 Denys top scored for Germany in the matches with Estonia and Turkey as he registered twice 16 points on the way to a straight victory after collecting another eight in the first clash with Croatia. “It was very important to qualify for the World Championship in Poland and I am very happy that we did it in such strong way. As for the victory over MACERATA, I think this is going to help us for the remainder of the regular season. We know that we can beat the provisional leaders of the national league, so this is a good feeling” Kaliberda says.

Last September Germany beat Russia to open the program of the European Championship in Poland but in the end the team did not make the semi-finals losing to Bulgaria in the 1/4 finals. What to expect now from the World Championship that is set to take place through September 3-21 in Poland? “It is very difficult to make any predictions about the World Championship” Denys says. “We definitely want to achieve a better result than we did last time, as four years ago in Italy our team ended the Championship in eighth place. I believe we can achieve something good and play again the 1/4 finals, but we have to step it up in order to make the semis and win a medal.”

This is Denys’ second year in Italy after moving down from Germany. Last year he played for the likes of Tonno Callipo VIBO VALENTIA, this season he is wearing the jersey of Copra Elior PIACENZA, a former national champion and a team with very high goals in the national league as well as in the European Cups. “I feel very good here. The first year was not that easy but I finally found a good ambiance here. The team we have here is really special. They all are very friendly and funny. Moreover, I have the possibility to play together with some of the best Volleyball players that have ever been around. On top of this, the Italian way of life is the best thing here. If you only mention the food, I think that this speaks for itself.”

The Italian national league remains one of the most competitive all over Europe. Does it take a lot of effort to play a very strong opponent every single weekend? “It was very difficult to get used to this but if you have to play your best every weekend, this is a perfect way to get better and improve. Right now I do really enjoy each of these matches, because they are a unique chance for me to improve my skills and better myself.”

After playing MACERATA in the national league, PIACENZA and Denys are going to play this team another two times in the Playoffs 12 of the 2014 CEV DenizBank Volleyball Champions League. “I think this will be a different story. We start from scratch and on that day we have to show once more that we are the better team. Of course we will approach these matches with a good feeling knowing that we beat them only some days ago but we always will have to play a perfect game in order to beat MACERATA. I still haven’t thought that much about the next steps on the way to the Final Four; we first have to beat Lube Banca MACERATA and this is a tough task we have to take on.”

As his family name may suggest, Denys was born in Poltava, Ukraine, before moving to Berlin and still speaks fluent Russian. “Actually the whole family with the only exception being my parents and my brother are still in the Ukraine. Personally, even though I was born in the Ukraine, I feel more German than Ukrainian but I am proud that I haven’t completely absorbed the Germans’ attitude” Denys says with a smile.

Kaliberda was the captain of the German national team that won silver at the 2008 Junior European Championship in Brno losing in the final match to a French side that was anchored by Earvin Ngapeth. Denys’ talent was immediately scouted by many observers and after playing for some more years in Germany, he found his way to Italy that for many players still remains the real Volleyball “Mecca”. “I started playing Volleyball at a young age and as a child you normally have big dreams. However, I realized that Volleyball could me much more than a hobby when I first joined the national team” he recalls.

Standing at 193 cm, Kaliberda is not a giant in modern Volleyball but he still can compete with much taller guys and turn into the leading scorer of his side as shown at the World Champs qualifier in Ludwigsburg. “Well, I do not think that only tall players can be successful in this sport. To my mind, a team becomes stronger when players with different features and skills are standing on the court.”

Denys is a very quiet and modest guy, so he may well portrait the essence of the “Fair Play – Volleyball Way” campaign that is being promoted by the CEV. “To me fair play means that you show and pay respect to your opponents. Since there is no physical contact in our sport, I think that Volleyball is generally quite fair. Unsportsmanlike behaviour is not something that you would normally find in Volleyball. It simply does not fit to it.”

To read more similar news from this country click on Italy.

I love you Kali ♥️