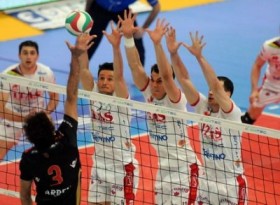 The best performance of the team of Stoytchev showed Zygadlo, Sokolov and Lanza, who played instead of Juantorena.

In the first set, Itas Diatec took the lead at the start (5:3, 7:5) thanks to the attack of Lanza and Sokolov, making difficulty for Belluno. It closed the set with 25:20.

In the second set, Sokolov was still dominant on the court. Trento was leading 13:8 until the first technical timeout.

Then Belluno lowered the difference to 17:15, but again Trento took the advantage and stopped Horstink change the score.

In the third set, the difference in result was always for 2 points.

Fei was the last to surrender, but Kaziyski and especially Lanza quickly secured the victory for Trento, scoring 25:22.