What do you do when star coach leaves for another team? You bring one of the greatest players of all time to replace him. Nikola Grbić is the new coach of Sir Safety Perugia! 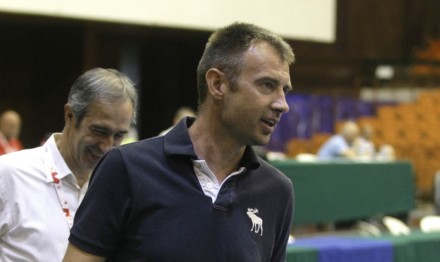 President Sirci is simply amazing. He first extended his star player Atanasijević for three more years and then he assigned a coaching spot to great Nikola Grbić. He will replace a fellow Serb, Slobodan Kovač and keep that Serbian cult in Perugia (Atanasijević, Petrić, Vujević, Mitić).

What a career. Just breathtaking and what an ending too. Starting from Klek in Serbia advancing to Vojvodina where he won three straight Serbian championships.

Then he spent a mindblowing 19 years in Italy! He won two Italian championships, three National Cups, Supercup, two Champions League titles, CEV Cup and the list goes on and on. But unlike many he ended his career in a spectacular way.

At the age of 40, he went to the strongest league in the World and dethroned Belogorie (The best team in the World). What a way to end, just amazing. As amazing as any part of his beutiful career.

Besides all of that he managed to win the most prestigious trophy in volleyball – the Olympic Gold. Only thing that is missing is the World Cup, but hey, then he would be a perfect and nobody is perfect, tough he came really close.

For more similar news from this country click on Italy.