Ivan Zaytsev: Success is in his DNA

The two FIVB World Championships are the highlights of the year. Each week in the run up to the title showdowns for the men in Poland (August 30 to September 21) and for the women in Italy (September 23 to October 12), we will introduce an international volleyball star. 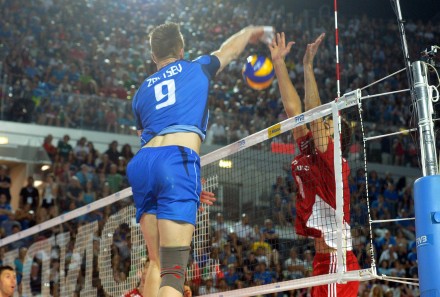 In part eleven of the series we find out about Italian hero Ivan Zaytsev and his Russian roots.

When Ivan Zaytsev was still a young boy, he actually really wanted to play ice hockey when he grew up. Preferably in goal. However, his father then took him to volleyball practice and “it was love at first sight”

“Ivan is not only an attacker, who regularly scores a lot of points, but is also a man who can make the difference in key situations,” said Italian coach Mauro Berruto. Zaytsev’s booming serves are as feared as his brutal smashes. The 25-year-old was instrumental in his country winning the bronze medal at the 2012 Olympic Games. Last year he added a second European Championship silver medal to the one he won in 2011, and was also named “Best Server”. There was another bronze in 2013, when Italy finished third in the FIVB World League – with Zaytsev named “Best Outside Spiker.”.