ITA W: Lloyd remains with the champions of Italy 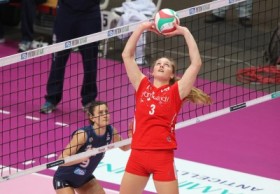 Despite rumors and reports to the opponent, in addition to the disruptive actions of the Turkish club, Busto Arsizio continue the contract with Carly Lloyd,  for another season 2012/2013.

The Setter stars and stripes, american best player in the NCAA championship, arrived in Italy last season, now for his amazing physical skills and techniques which resulted in one of the main architects of the three great acclaim Yamamay.

His stay is a sign of great confidence in the sports project Carli Future of Volleyball.
For the companies Busto Arsizio, which this year will tackle his first Champions League, located in the sign of the continuity of the first bricks of the team, now is time to look to the future: in fact, Wednesday is scheduled the press conference introducing the new title sponsor, which will complement Yamamay in the name of the team next season.