Stefana Veljkovic and Sanja Malagurski will be part of the project of Asystel MC Carnaghi. The multi-year agreement is reached with the two Serbian players, who last season played for Asystel Novara, stopped many advances received from foreign and Italian clubs. 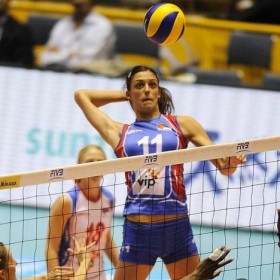 The history of Stefana Veljkovic in Italy began in 2010 when after being hired by Asystel Novara after playing in Postar 064 teams of Belgrade and Crvena Zvezda Belgrade. With them she won five league championships and four national cups and was named best server in the CEV Cup in 2010. With the national team she won the silver medal at the University games in 2009 and the European League in 2010.

In two seasons in Novara (regular season and playoffs)she has scored 366 points, placing 96 blocks and 19 aces.

They discovered the talent Sanja Malagurski.

The Serbian player, is able to play with the same effectiveness the roles of the opposite and middle blocker, has put her signature in Slovenian, Romanian and Serbian competitions winning domestic cup and league. Since summer 2010, her list is enriched with the victories of the Serbian team with her contributing to the success in 2010 and 2011 editions of the European League. Malagurski name was on everyone’s lips in the summer of 2011 when they won the bronze at the 2011 Grand Prix but especially the gold on the European Championsip.

The knee injury that happened against South Korea during the first round of World Cup 2011 has forced her to skip entirely her first Italian season and she is now eager to show everyone that knee problems are over and that her talent is ready to explode in the Italian top division.

ITA M: Are you ready for Italian...