Nikolay Jeníkov Jeliazkov is the new head coach of Caffè Aiello Corigliano. Beside him on the bench of the rossoneri will sit Giovanni Torchio as assistant coach. Jeliazkov and Torchio will guide the rossoneri in the next Serie A2. The two coaches have already arrived in town yesterday and have worked together with the sports director Pino de Patto to refine the roster that will begin from August to work with the athletic training preseason. 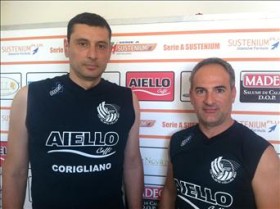 Jeliazkov is born in 1970, he was coaching the Bulgarian youth national team. Before that, he was in Greece in Olympiacos and then Orestiada. As a player, he has been in his home country, Brazil, Italy (Bologna and Ferrara) and Greece. He also collected a few caps in the Bulgarian national team.

Torchia coached Corigliano in B2, earning promotion in B1, he had an experience in A1 with Vibo and also went abroad in Finland as head coach. Last year, he was back in Italy as assistant at Castellana Grotte (A2), where he won the cup and the playoffs.

The two technicians will be officially presented during a press conference to be held Tuesday, June 19 at 15 at the Pala Corigliano.