Sam Deroo was introduced to the media. He began to play volleyball at 6, following the footsteps of his father. 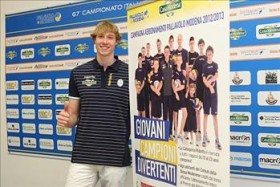 He is only 20 but can already boast two league titles as a starter with Roeselare in his home country as well as participations in the Cev Cup and Champions League.

“It’s a dream to be here – said Sam who’s recovering from an ankle injury – I had been dreaming to come to Italy since I was a little boy and being in such a famous club like Modena is the best I could have wished for”.