For the seventh consecutive season Trentino Volley will have a player of Bulgarian origin in their team. 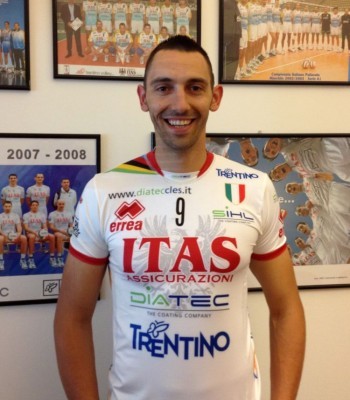 To continue the very positive and successful tradition that began with Mlyakov and then went ahead with Nikolov, Stefanov and Sokolov, the leading scorer of the last season in Serie A2 Nikolay Uchikov came.

The twenty six year old together with Jan Stokr will make the pair of opposites available to Radostin Stoytchev and Roberto Serniotti in the year 2012/13.

After three seasons on a loan in Serie A2 he will try to prove himself.

“I am extremely motivated and ready to give my all” Nikolay Uchikov said. “Trentino Volley for many yearswas focused on me but they preferred that i mature in the second Italian league. But now I can finally measure up with Serie A1, the best league in the world.”

“I am so happy that this opportunity is now opened for me. I really want to be helpful and above all to win as much as possible” he added.

“Our market goes according to our plan” the President Diego Mosna said. “The arrival of Uchikov had in fact been planned for some time. We believe he is a strong player and motivated to be responsible not to make us regret the departure of Sokolov and work even harder to become number one.“

NORCECA M: USA and Argentina to semifinals of Men’s Pan Am Cup

PHOTO OF THE DAY: Happy day for...