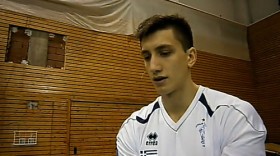 Last season he played for Iraklis Thessaloniki, the team that won the Greek League (at the table for the withdrawal of Finikas Sirou in protest against the decision not to penalize the Iraklis for public order problems that prevented the playing of the 5th game).

Pelekoudas, who is a part of the Greek squad since 2009, with Iraklis in 2011/2012 finished third in the qualifying group A of the Champions League by winning 3 and losing 3 matches.

Margutti said:”He is a young player but he already has good international experience and, above all, an athlete with excellent growth potential.”