They finally made it! Modena will fight for the trophy of the Serie A1 after knocking out the big rival Trentino in the playoff semifinals! 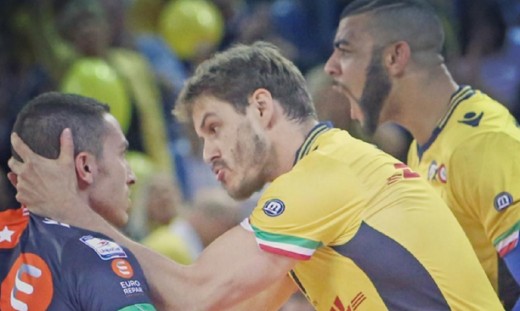 The playoff semifinals series between these two sides ended after four matches – Modena won it by 3-1! In the fourth match, the side of Angelo Lorenzetti was simply much better and deserved to play in the finals!

We have to mention that Trentino missed Mitar Djuric so much, who didn’t play in this game due to injury. Today he is celebrating his birthday but we believe that this defeat will leave a bitter taste…

Trentino opened match much better by making four consecutive points 4-0! Block of the home team worked very well and they quickly earned 10-4 lead. Afterwards, Modena managed somehow to decrease the lead of the rival 19-17. With two amazing rallies (Kaziyski scored and Ngapeth got blocked), Trentino earned new 4-point lead. But, Modena again reduced the lead of the rival and were trailing only by one (22-21, 23-22).

After mistake of Saatkamp from the service line (24-22), Vettori saved the first set point (24-23) and a minute later Modena tied the score after a great block on Nelli!

Kaziyski didn’t manage to score for new lead, Vettori took the opportunity to smash the ball and to give first set point to Modena, 24-25! Trentino saved it, but Modena used another chance and after a great block of Elia Bossi, Lorenzetti’s side took the lead in sets 1-0 (27-25)!

After a few rallies in the second set, the result was tied. Home team again got the big lead 13-8, but Modena reduced it quickly with 3-0 scoring run. At the result 19:18, Kaziyski scored an incredible point and after a mistake of Ngapeth they had big advantage 21-18.

In the third set we saw a new and fresh team of Modena! They started playing like from another planet since the beginning of the set until the very end!

There was no chance for Trentino to make comeback as Modena continued playing like in the third set. In the fourth part of the game, Modena again controled the situation on the court and home team had to surrender.

The playoff final series will start on 1st May!

RUS W: Fernanda Garay – “I want to stay in Dinamo”

Italy: No mercy from Perugia