Sir Safety Perugia have finished 2015/16 season as the vice-champions of Serie A1. Next year, they are planning to make one step further… 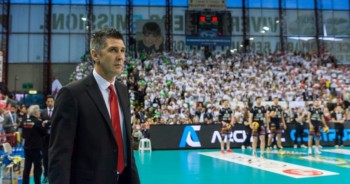 Their head coach Slobodan Kovač gave a large interview for gazzetta.it in which he revealed some transfer plans of Sir Safety Perugia during the current window.

“It is obvious that if Ivan Zaytsev join us, we will be able to show much more, not just in the Playoffs, but also during the Regular Season. I hope that he will choose Perugia. The fact that he has put a video on his Facebook account, telling everyone that he is doing practices to play as outside-hitter, gives us theright to believe that he will be here in the next season. He knows that other teams see him as an opposite, while that we want to use him as our “hammer” outside-hitter, as we have Atanasijević at the position of opposite. We also need his personality in our roster.”

Kovač also revealed that Luciano de Cecco will probably stay in Sir Safety Perugia, while that the club will try to sign Marko Podraščanin.

“De Cecco has a valid contract and obviously we do not think about signing any new setter as long as we have him on our side. He is one of the best setters in Italy. At the same time, if we sign Ivan Zaytsev then we will have room for one more foreign player and we would like to have Marko Podraščanin in our team. He is a player of top quality who would definitely fit into our roster very well.”

More,they will take even more…

@Bank Where does Sirci get all this money from???

If Perugia will play with a reception line consisting of Russell-Zaytsev-Giovi, De Cecco should rather improve his athletical skills/speed. he will have to make a lot of km……

@The Hoff everybody is talking about new libero and not Giovi…

@The Hoff i agree aaron russell is used to fast sets, because he is fast. and he got a fast hand, he is used to micah’s fast set. but dececco always give him slow low sets thats why he always adjust. but is he set him fast he score. look their pipe combination play dececco master that. all dececco need is fast play and not always atanasijevic.

@dee jae69 When i talked about speed improvement, i mostly referred to De Cecco`s footwork. Neither Zaytsev nor Russell are high level receivers, so De Cecco will have to run a lot 🙂 Russell-Zaytsev-Atanasijevic would ensure good firepower from the wings but a less skilled/cheaper setter would get the job done, too. Just look at Zenit Zazan/Kobzar…..

thats alot of money to invest look what happen to lube they build a dream team and they failed. their roster is friggin good all they need to mentally prepare and more championship experience thats it