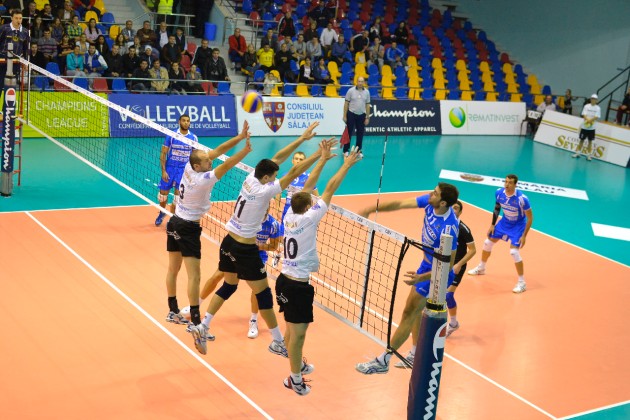 The first set could be described as a battle of nerves, both teams trying to get the control of the game. The guest team from Italy set the pace for the most of the set, putting a lot of pressure on Remat’s defense through the powerful attacks by captain Wout Wijsmans and Luigi Mastrangelo. Remat surprisingly came back in the battle after the second technical time-out, with a few blocks of Silmar Antonio de Almeida and Razvan Mihalcea (20:20), breathtaking rallies and tricky balls, challenging Bre Banca Lannutti CUNEO to fight hard for each point, but the Romanians dropped concentration at 30 all and eventually CUNEO won the set 32-30.

Despite being very good in all aspects of the match in the second set, CUNEO’s players had some problems at the beginning of the set, when Remat fought bravely and got close to the Italians after Razvan Mihalcea made an ace at 7:7. However, the experience of the players from Bre Banca Lannutti CUNEO was vital for the team. There were some nicely set balls by Nikola Grbic (14:11) and a few attacks of Earvin Ngapeth. Tsvetan Sokolov anchored his teammates to winning the set 25-20 with a superb service.

The last set was clearly dominated by CUNEO that had even 7 points of margin and seemed very confident. Andrea Rossi scored a few outstanding attacks while setter Nimir Abdel-Aziz served spectacularly and blocked well (25-18).

Remat ZALAU’s head coach, Mariusz Sordyl, stated after the match: “Each point gained by Remat was a success. The first set was extremely good for us and the spectators, who definitely enjoyed it. I’m not happy that we lost, but taking into consideration the way we played, I’m very optimistic for the next Champions League matches”.

Rob Dvoranen, the captain of Remat, agreed with his coach, and said that “we played as good as we could, but we didn’t manage to end the match as we started it, maybe because our opponents were very strong. I think that things could have been different if we had won the first set”.

Roberto Piazza, head coach of Bre Banca Lannutti CUNEO, was a bit disappointed with the way his students played, but said that “for us, it was important to win the first match in the Pool. We have many chances in Pool G and I also believe that Remat might finish the prelims in third place”.

Wout Wijsmans, the captain of CUNEO, admitted having some trouble in the first set, saying “it was a difficult set and the way Remat played surprised us. We didn’t know anything about this team, so we had to be very focused on the match”. The legendary setter of CUNEO, Nikola Grbic, was very impressed with the ambition of Remat ZALAU’s players and also the fans. He said: “It is very hard to play a match with a team like Remat that wants to win against one of the powers in the European Volleyball arena. The audience was beautifully loud and put pressure on us”.