Vakifbank ISTANBUL swept past Swiss Volero ZÜRICH in straight sets in the 2013 CEV Volleyball Champions League – Women. Christiane Fürst topped the charts with 13 points. Katie Carter was the best scorer for the Swiss team with 8 points. 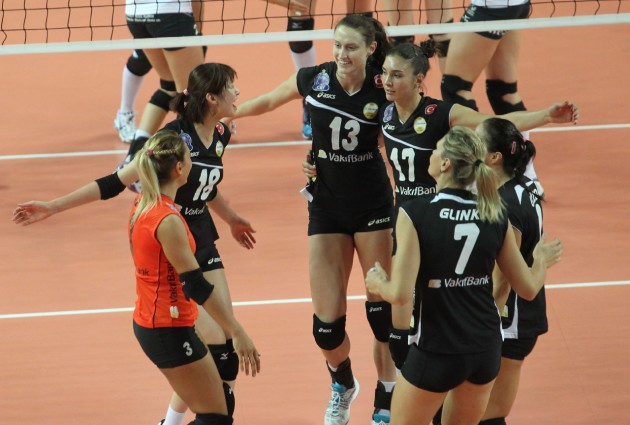 Vakifbank, the champion of the 2011 edition, started out strong with clever serves and went up 8:3 by the first technical time-out of the opening set. The hosts had no intention to ease down the speed and technique of their serves even after the time-out. They kept targeting the wing spikers of Volero, especially Mariya Voitenko, leaving no chance to Japanese setter Naoko Hashimoto to use Cuban star Nancy Carrillo or make fast combinations in attack. Vakifbank opened the gap even further to an 8-point margin at 16:8. Even a time-out by the head coach of Volero, Dragutin Baltic, at 21:12 did not prevent the local powerhouse from attacking further and dismantling Volero defense system. The hosts closed the set at 25-16 with Polish star Malgorzata Glinka’s down-the-line parallel spike.

Volero started the second set having awakened after the first set shocker. With Evgeniya Kozhukhova’s serves and team captain Nneka Onyejekwe’s attacks, the Swiss league champion jumped to a 5:2 lead. Yet, with a couple of attack errors by Voitenko and fierce attacking and blocking power over the net by Glinka and German tower Christiane Fürst, Vakifbank turned the odds and the score table around at 8:6 in their favor. Later after the technical time-out, Volero started making mistakes forcing Baltic to call for another time-out at 12:8. With further unforced errors all the way to 14:8, Baltic called Carrillo out to substitute her with US American opposite Katie Carter. Carter in fact proved to be a decent substitution for Volero as she gained two points in her first two attacks. But her friends were unable to join her so the hosts led by 16:10 at the second technical time-out. The Serbian star Jovana Brakocevic came in for Gözde Sonsirma to score an ace for to bring the score to 20:11. Head coach Giovanni Guidetti continued to bring in substitutes and Vakifbank managed to keep the 9-point cushion to close the second set at 25-16 as well.

Volero started the third set strong again with patient floor defense and strong attacking by Carter over the net as she was chosen among the 6 to start in replacement of Carrillo. With fast attacks by Gözde Sonsirma as well as Fürst, Vakifbank went head to head with the Swiss team (5:5). Yet, with the attack of Fürst and Saori Kimura and the block of Naz Aydemir, the hosts cruised past by the first mandatory stop (8:5). Vakifbank kept targeting Voitenko with their serves to force her to make unforced errors. She was then substituted by Karla Klaric. Although Volero tried really hard to defend every ball, they couldn’t help the margin to widen to 4 (13:9). The local heroines raised their game level even further to lead by 16:11 at the second technical time-out. Jovana Brakocevic raised the bar for her team with her serve and opened the gap all the way to 19:12 with effective jump serves. Vakifbank did not lose their concentration down the final stretch as well and clinched the set and the match at 25-16.

Christiane Fürst topped the charts with 13 points and her teammate Gözde Kirdar Sonsirma followed her with 11. Katie Carter was the best scorer for the Swiss team with 8 points.

Volero head coach Dragutin Baltic was quick to deliver his congrats to Vakifbank and continued: “We have been together only for two months now. Our group is really strong and Vakifbank is maybe the best team in the Pool. I think they have their best team ever this year. They may even go on to win the Champions League this year. We, on the other hand, should continue to make progress and train hard”. On Carrillo’s performance below the expectations: “She has not played for three years. She definitely needs time to deliver her potential”.

Volero team captain Nneka Obiamaka Onyejekwe stated: “We are definitely in a tough pool. On top of that, we are a new team and this was our first game. We need time to adapt and build a team. I think we will be much better next week”.

Vakifbank head coach Giovanni Guidetti was happy with the team’s performance: “I think our block and defense worked really well. Especially, the fact that our defense was very solid prevented Volero from scoring points. I am also very happy with the way we set our attackers. I also believe that our players can find better solutions to attack at an individual level. It was generally a good start to detect our room for improvement”.

Team captain Gözde Sonsirma acknowledged the great play of her teammates and continued: “We have been training hard for the Turkish League and the Champions League for two months. I believe that we demonstrated all the tactics our coach had recommended. We served really well, dismantled their reception system forcing them to play with high balls. Plus, we have a very high block and solid defense. So, everything worked out really well. We are obviously at the very beginning, though. Hopefully, we will play much better”.