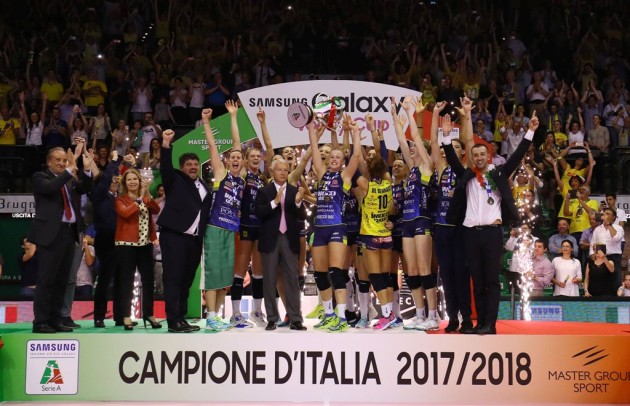 For the second time in the history of the Italian Serie A1, Imoco Volley won the champions title. This season, they defeated last year’s champions Igor Gorgonzola Novara in four final matches. Polish setter Joanna Wolosz was named for the MVP.

We cannot forget that Imoco will also play at the Final Four of the CEV Champions League next week in Romania and their opponents in the semifinal will be the Turkish champions Vakifbank Istanbul.

But, let’s return to today’s final match in Italy which was played in Conegliano.

Croatian opposite Samanta Fabris exploded today, she scored 31 points with 57% in attack and she was the only player in the team who scored points from serve – 6 aces. Samantha Bricio Ramos and Kimberly Hill finished a match with 14 and 13 points.

Wolosz ‘the worst setter in the world’ according to BrazilvolleyTroll was named MVP. Lol

I am sorry for Serie A. I wanna make a comparison between champions of the turkish league and Serie A. On one side, the MVP is an olympics gold medallist and olympics’ MVP zhu ting, on the other side you have joanna ‘the nothing’ woloscz. In the turkish final there were 8 players who played in the semifinals of rio 2016 (ting, boskovic, ognyenovic, rasic, larson, adams, sloetjes, robinson), on the other hand, Serie A final had 3 olympics semifinalists (de kruijf, hill, plak). Absolutely, this is not the definite indication of the volleyball quality, but it shows something. Woloscz has no quality at all and in a stronger league she wouldnt be the MVP. I am really sorry for Serie A and please MAKE SERIE A GREAT AGAIN. In addition to that, in Turkish league final there were 11 players, who got a medal in the 2017 european championship (akyol, kirdar, simge, onal, orge, caliskan, baladin, sloetjes, Rasic, ogneyonovic, boskovic), whereas in serie A there were only 2 players (plak, de kruijf). Really? Who is woloscz, who is fabris!? PLEASE MAKE SERIE A GREAT AGAIN.

Re: @BRAZILvolleygirl
How I hate you, you write such stupid things. You don’t have to play at the Olympics to be a great volleyball player.

Don’t be sorry cause you clearly know nothing. First without the Novara suicide against Galatasary at home there could be 2 italian team in champions league final 4. Second you forgot the world league finalists like Egonu, young but stronger than any spiker you mentioned before, Chirichela, Folie acc…
Fabris and Woloz are great player but they don’t play in a strong national team. Talking about last European Championship the best setter of the tournament Dijkema play in Firenze, best oh Buijs next year will play in Italy like the best mb Veljkovic.
Ognyenovic, Larsson, Adams are all good player but nothing special, in Turkey there is one really strong team the rest is nothing.

She’s probably ugly with blonde eyeglasses and a braces. Hahaha

Of course, you mean BRAZILvolleygirl

Yes, haha. She is so smart, other.