Russia Women’s national team progressed to the 2020 Tokyo Olympic Games after a thriller against South Korea in the last round of the FIVB International Qualifier, a few days ago. But, one member of Russia’s coaching staff went too far in celebrating the success. 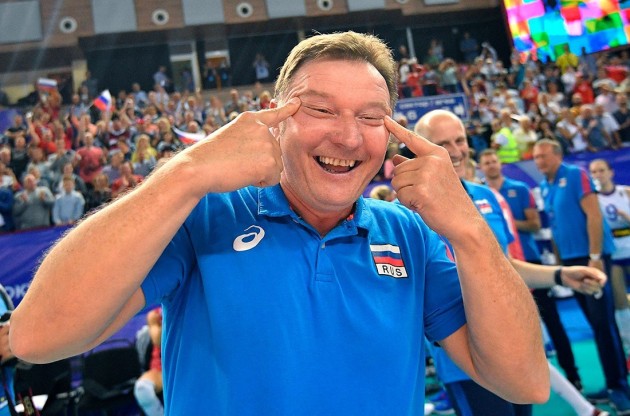 Russia staged an amazing comeback in a decider against Korea, at home in Kaliningrad, and secured a spot in the Olympics in Tokyo.  The players and members of the coaching staff of “Zbornaya“ were delighted after the win and wanted to share the joy with the crowd in the hall. But, some of them did it in an inappropriate way.

The assistant coach Sergio Busato posed for a photo by pulling back his eyes with both hands, which is a gesture that is usually used to mock physical characteristics of Asian people. Korean media stressed that pulling back eyes is not allowed by the International Olympic Committee (IOC) and is considered an act of racism.

“The FIVB is considering whether to take disciplinary action in regard to the victory celebration. We have made a formal protest in order to prevent recurrence of such acts,“ The KVA official said to the same news agency.

This was not the first time that this happened in the Volleyball world. Two years ago, Serbia Women’s national team celebrated the qualification for the 2018 FIVB World Championship by posing for a group photo in which nearly all players made the same act as Busato. They explained afterward that they did not mock Asians but only showed they will be the part of the World Championship in Japan.

OQT M: Drzyzga says León’s under pressure – “He’d like to be left alone“

BRA W: Veteran opposite Renatinha returns to Sesc after more than a decade

Don’t worry. Russia won’t get far in the Olympics.

No racial discrimination. You don’t deserve to be a coach

Serbians and Russians always do that in real life too, which makes them uneducated and ignorant. I think asians should pinch noses in order to show them mocking big noses and very bad smell also.

Re: @Sorry
If you are saying that people are ignorant and uneducated what about your comment? You said that ‘asians should pinch noses in order to show them mocking big noses and very bad smell also’ That is little hypocritical in my opinion. Lead by example, don’t be ignorant and uneducated like Serbians and Russians. By the way this coach is Italian. Maybe you should include them in your statement. Think before you say something.

Doesn’t matter. If they don’t show respect asians never forget. In Russia I have seen lots of people judging from outside not from the inside. Same as Serbians!

The Russian Federation just announced the Guido got suspended for the next two international tournaments. Lets all give him the Italian salute.