Tuomas Sammelvuo was recently named head coach of Finland men’s national team. Sammelvuo – who is 36 and still active playing in Russia for Lokomotiv NOVOSIBIRSK – joined the national team for the first time in 1993. 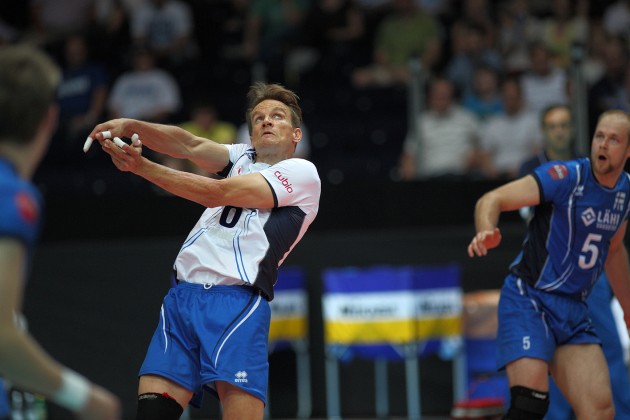 Sammelvuo – who is 36 and still active playing in Russia for Lokomotiv NOVOSIBIRSK – joined the national team for the first time in 1993 totaling 294 caps with the “Suomis” throughout his long and very successful career. He has signed a contract for two years with an option for two more to join forces with the Finnish Volleyball Association whose main goal is to qualify for the 2016 Olympics in Rio de Janeiro.

“It feels great. I am very happy and proud at the same time for being given this opportunity. I want to thank the Finnish Volleyball Association for their trust as they have made an important decision by appointing me to coach the national team” says Sammelvuo, whose professional career started in France in 1997.

“This comes at the right moment as I can retire from competitive sport while knowing exactly what comes next” he adds. “I always dreamt of becoming a coach and I can fulfill this dream by coaching our national team, so this is just fabulous. This is quite a big step but there are times in anyone’s life where you have to take up a challenge, especially if you are given a chance. I do want to develop the group and myself as a coach at the same time”.

The Finnish Volleyball Association had started its investigations this past autumn after Daniel Castellani had decided to leave the group to focus more on his private life.

“Tuomas has ambition, passion and charisma, i.e. all the qualities you expect a coach to have” stresses the Secretary General of the Finnish Volleyball Association, Hanna Iiskola-Kesonen.

“He has been in international Volleyball for the past 20 years and I think he’s ready to take this cause and contribute to the development of Finnish Volleyball”.

YEC F: Come from behind win for Germany to stay in contention for final round ticket