YEC F: Come from behind win for Germany to stay in contention for final round ticket

Germany stormed back from two sets down to eventually edge Hungary 3:2 to stay in contention for a ticket to the final round. An eventual defeat of Germany would have paved the way to the home heroines of the Czech Republic but as a result of that tie-break win. 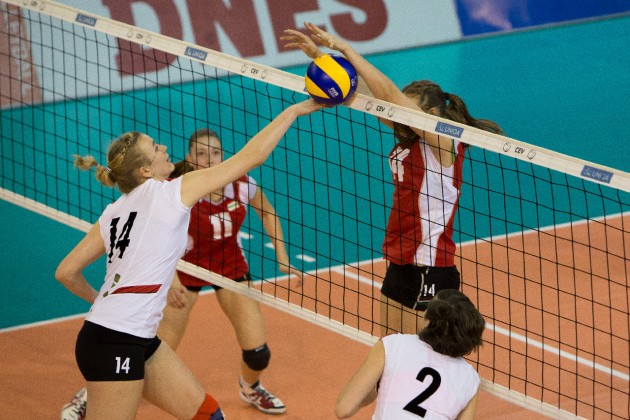 Germany started out strong (8:3) in the first set but afterwards lacked accuracy and Hungary could impose its pace. Germany trailed 11:16 halfway through the second set and Hungary could quickly pocket a 2:0 lead. However, Germany eventually fought its way back in set 3 anchored by spiker Maja Hammerschmidt and Irina Kemmsies. Germany stepped up to dominate the scene in set 3 and 4 and stretched momentum into the tie-break claiming that 15-7 that completed a fabulous comeback.

“It was a very tough game and we are happy that we won in the end. Unfortunately we woke up a little too late and we lost one point. I express my respect to the team because they did react and stormed to the victory. When it comes to youth national teams it is somehow normal that you have such ups and downs” said Germany’s head coach Jens Tietböhl.

“After moving quickly to the lead in the first set we probably thought it was going to be easy and Hungary punished us. Still we fought our way back and won, which is the only thing that counts in the end. I see this game positively as we have taken two points” stressed setter Irina Kemmsies.

“We knew that Germany has problems in reception so we needed to serve well to pressure them. We did this in the first two sets, but then the match got tight. We have taken one point from one of the favorites in the tournament but this is not enough for us. We came here to Brno to qualify to the final round and eventually failed” said Hungary’s head coach Attila Nagy.

In the other match of the day that was anyway not going to have an impact on the top of the charts, Portugal scored their first victory of the tournament by edging Lithuania 3:1 (25-22, 25-14, 26-28, and 25-10). Barbara Gomes top scored for Portugal in this winning effort with 27 points.

“We are happy we got at least one win. It is the result of our hard work during the preparation phase. Today we played better than our opponents and deservedly won” said Portugal’s team captain Ana Martins after the match.

“We have to recognize that our opponents were simply better than us. Thank you to the local audience here in Brno for their support; we played well and enjoyed being here, hope we’ll come back again one day” stressed Lithuania’s head coach Jolita Kontvainiene.

YEC F: Poland makes it to final round after fourth consecutive win