The European Refereeing Commission (ERC) chaired by Dr. Jan Rek met this past weekend in Luxembourg City for a meeting whose agenda was very extensive taking into account the many challenges to tackle to continue the development of Volleyball. Read the latest news from volleyball world on worldofvolley.com. 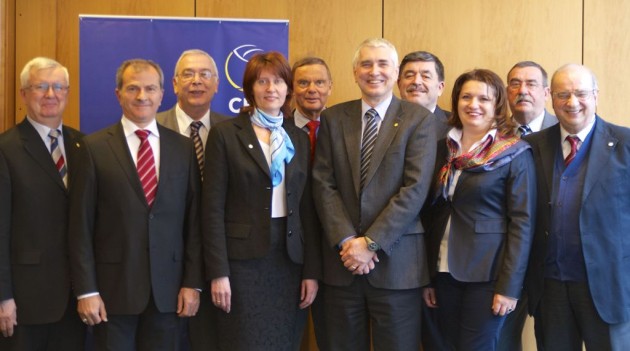 Dr. Rek informed the ERC members about the innovative vision and philosophy that are being promoted by FIVB President Dr. Ary Graça as well as by the chairman of the FIVB Refereeing Commission, Hassan Ahmed Mohamed. The ERC proudly ascertained that its projects and activities do already match with the FIVB plans and that the quality of the work performed in Europe is seen by Mr. Mohamed as a reference for the future developments to be achieved in all other Continental Confederations.

The ERC President was also extremely pleased to review the positive development resulting from the Referee Delegate seminar held last year in Fribourg, Switzerland, which boosted a significant progress in standardizing and unifying procedures and references in evaluating the performances of the international referees.

Two members did join the ERC for the very first time, namely Mrs. Oana Sarb (ROU) and Mrs. Zorica Bjelic (SRB). Mrs. Sarb – after having previously joined forces with the European Beach Volleyball Commission (EBVC) – was made responsible for Beach Volleyball refereeing while Zorica Bejlic – who stopped refereeing after the 2012 London Olympics and a remarkable career will take care of the development and promotion of female referees to follow up on the successful seminars that the CEV organized for the past three years with the goal to support the involvement of women in Volleyball refereeing. Mrs. Bjelic will be also leading a series of activities resulting from a project whose primary aim is the development and education of the next generation of Volleyball referees.

The profile, performances and status of all active international referees were reviewed by the ERC by exploiting the tools provided by a still in-progress database that will help unify and standardize the procedures for all appointments in Volleyball as well as in Beach Volleyball.

The ERC looks forward to the Beach Volleyball referee seminar scheduled for early April in Antalya, Turkey, in conjunction with the Satellite tournament that will open the 2013 season and where the focus will be primarily on the changes of the rules of the game coming into force this year. A special working group will run there as well to involve all Beach Volleyball Referee Delegates and standardize methods and procedures applied in Beach Volleyball refereeing similarly to what was already done for Volleyball.

A Volleyball referee seminar focusing on the rules of the game and their respective changes shall follow in late May – most probably in Montreux where the annual Volley Masters is set to resume this year with the participation of 8 elite teams.

The ERC members were also busy with some administrative work and especially in making the nominations for the many competitions that will be highlighting a busy 2013 year.

The ERC did welcome Stewart Dunne who – after joining the CEV headquarters this past October – was recently made responsible for supporting the work of the Refereeing Commission with a primary focus on the education and development of the next generation of Volleyball and Beach Volleyball referees next to his role as CEV Technical Development Coordinator.