Youth teams from Turkey and Russia opened this 2013 CEV Youth Volleyball European Championship - Boys that is being hosted by Belgrade (SRB) and Laktaši (BIH). Russia opened the tournament with a straight sets win 0:3. Yasin was the top scorer for Turkey, Poletaev scored the most points for Russia and on the match, 14. 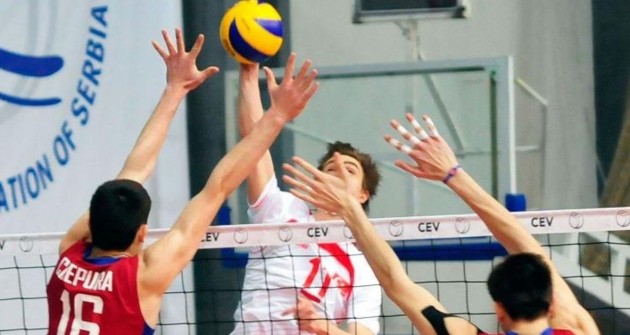 The first set started point for point, Turkey had the lead on the first tehnical time out 8:5, but then Russia improved their game and tunred the result in their favour by the second tehnical time out 12:16. In the second part of the set, Russia was dominant and won 25;17.

Russia started played strongly in the beginning of the second set, and quickly got to a five point lead 3:8. Turkey, however, didn’t give up and managed to reduce the gap to a signe point 15:16. After that Russia stepped up again and closed the set 25:20.

Yasin was the top scorer for Turkey, Poletaev scored the most points for Russia and on the match, 14.

In the next round, that is on program tomorrow, Turkey meets Bulgaria, Russia faces Finland.