Bratislava, Slovakia, January 30, 2012. Slovakia’s Cup finals were attended this past weekend by a total of 3'000 spectators in Bratislava as the home sides of Volley Team UNICEF (men) and Doprastav (women) eventually seized the trophy. Via that result these teams got the right to play for the Czechoslovak Cup that will be at stake this coming February 15 at “Hant Arena” in Bratislava being joined there by the winners of the national cup in the neighboring Czech Republic. 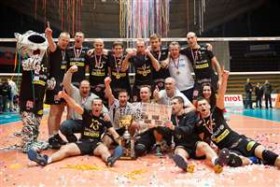 Doprastav repeated last year’s win by edging 3:1 the archrivals of Slavia EU while Volley Team UNICEF – lining up some great players such as Richard Nemec, Branko Pistovic and Gabriel Chocholak – eventually had the upper hand against Slavia SVIDNIK at the end of five long and exciting sets.

The men’s final was played in front of a sold-out house with 150 fans having traveled for some 480 km to make it to Bratislava from the town of Svidnik, which is located in eastern Slovakia, right next to the boarders with Poland.

The atmosphere was great and the people were standing on their feet as Slavia SVIDNIK went up 11:8 in the tie-break, thereby being close to take the cup.

However, Volley Team UNICEF was able to turn the odds around and a spike of Branko Pistovic finished it off for the home side from Slovakia’s capital city at 16-14.

Pistovic, who was named best player of the game and is also acting as coach, said: “We are evidently happy especially as the atmosphere tonight was just fantastic. We organized the finals of the national cup together with the Slovak Volleyball Federation and I am more than pleased with the general outcome of this joint effort”.

Even though they missed out on the cup, still this remains the best result in history for the club of Slavia SVIDNIK.

“We were very close to win the match but we have a young team and I think we lacked the necessary experience when it came to the last and deciding points. The atmosphere was simply great tonight and I have to thank our supporters who traveled that long to come here and cheer on us” says Slavia head coach Jaroslav Vlk.

The men’s final was preceded by the last act of the women’s competition where Doprastav easily controlled the operations as Slavia EU was missing two middle blockers who got recently injured.

“I think we did well especially with our service. All matches with Slavia are very tough and I am happy that we have won the Cup” stresses the mentor of Doprastav, Eva Kosekova.

“Our opponents fully deserved to win; we played without libero while they always served strong” adds the head coach of Slavia EU, Martin Hancik.

American-born Victoria Henson and Antonia Golitkova were awarded as best players of the final for Doprastav and Slavia respectively.

ROM W: Spanish opposite in Targoviste