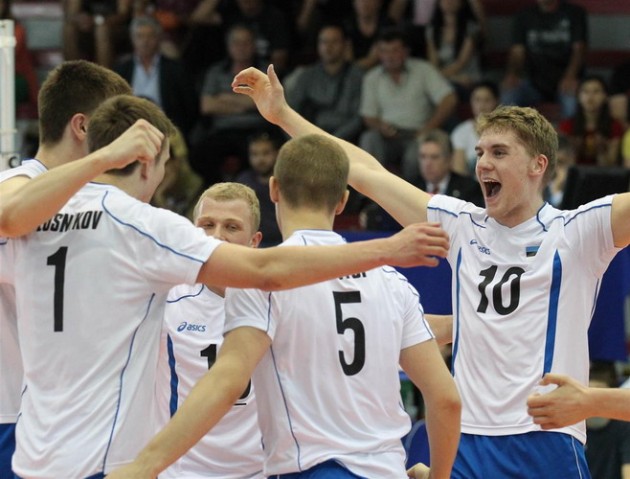 Estonia and Bulgaria engaged in a neck-to-neck race right from the start of their clash with the guests displaying great skills in defense as well as in blocking. Estonia got up by five points before the second technical time-out of the opening set exploiting also the poor reception showed by the local heroes. However, Bulgaria narrowed the gap by scoring three consecutive points but once more the guys mentored by Dragan Nesic lacked consistency in defense so that Estonia could keep the lead. Though Bulgaria drew level at 21, Estonia played superbly in the final stages of the set to bring it home at 25-21.

The plot of the game did not change much in the second set where the teams played point for point before Bulgaria claimed a very narrow margin at the first mandatory stop (8:6). However, the local favorites suffered once more a series of setbacks in reception with Estonia going up 16:13; after that stop, Bulgaria nevertheless got back on track and helped by a few mistakes of their opponents could go for the provisional 1:1 in sets (25-18).

The tension was to be perceived in the air and Bulgaria’s Zlatko Kyosev even got a yellow card in the third set. Bulgaria went up 8:5 and a series of great serves contributed by Rozalin Penchev did help the home side move up by eight points, thereby paving the way for the final 25-18 and 2:1.

Bulgaria stretched that momentum to the early stages of the fourth set (8:4) but after losing focus, they did see their opponent storm back and level the score at 9 all. Some Bulgarian mistakes could help Estonia set the tempo of the game by the second technical time-out (16:13) and after a few long and dramatic rallies, another Bulgarian player – this time Georgi Seganov – received a yellow card. Estonia profited of the situation to claim a 5-point lead and finished it easy at 25-20 to call for the tie-break.

After a good start by Bulgaria (2:1), Estonia got to the front by exploiting good serves by Robert Täht (5:3); the score stood at 8:6 for the guests as they switched sides of the court and a series of excellent blocks paved the way for the success of the team mentored by Urmas Tali (15-7). Rozalin Penchev top scored in the end with 15 points while Robert Täht paced Estonia with 15.