Rebecchi Nordmeccanica PIACENZA won the Serie A1 Scudetto! Caprara's team dominated the whole match against Imoco Volley CONEGLIANO except for the third set 1:3. Lucia Bosetti was the MVP. 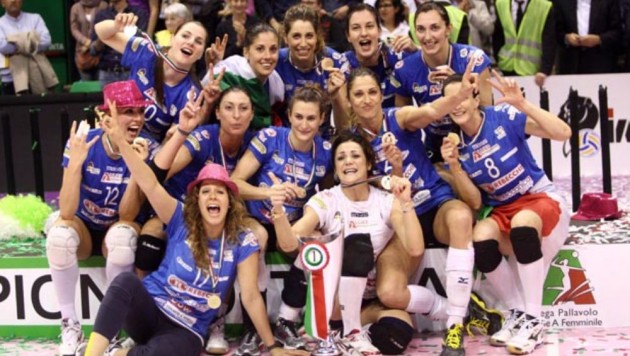 Caprara‘s team was superior in this match, as the number of points scored by CONEGLIANO show (10,12,9) in the sets it lost.

The home team was an equal only in the third set which it won 25:22. The rest it was all PIACENZA.

PIACENZA had the best game in the series. CONEGLIANO had a low attack 22% in the first, second and fourth set, it had 5 blocks, to 17 of the guests, Leggeri and Guiggi had 11.

Lucia Bosetti was the MVP. She played the whole series with an injury which was shown only by her bandage. She put her signature in the fourht set (62% attack, 1 block, 1 ace), she also scored the winning point.

Check out all the Statistics from the game here.