Finland booked their second victory of the tournament edging the Czech Republic in straight sets (25-18, 25-20, and 25-19) after 80 minutes of play. Finland’s Elviss Krastins topped the scorers’ chart with 13 points, while Jan Galabov scored 9 for the Czechs. Read latest volleyball news on Worldofvolley.com. 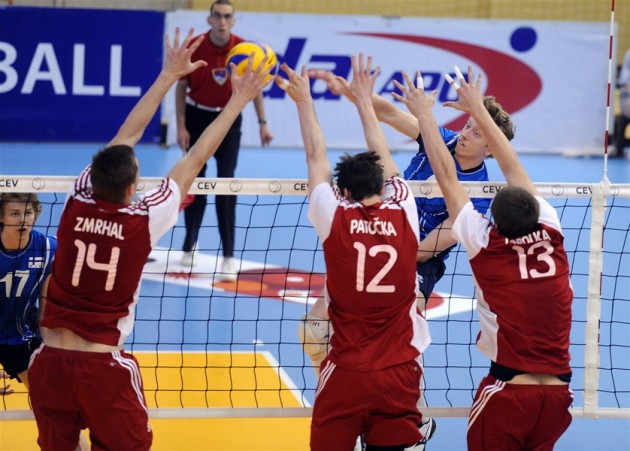 After a close start Finland created a small gap and went to the first technical break leading 8:4. The distance was further extended through the second obligatory time-out to 16:11, and by the end of the first set the Finns had spread the margin to 7 points (25-18).

In the second set, Finland got off to an early lead (8:3), but the persistent Czech team slowly but surely managed to close the gap to just one point of difference (20:21). However, Finland did not want to let this one slip away, and with four quick points they wrapped it up at 25-20 to double the lead in sets (2:0).

In the third set Finland started in the same manner as in the previous one getting away to an 8:3 lead before the first technical time-out. The Finns routinely brought this game to an end at 25-19. However, their libero, Lauri Kerminen, had a misfortune injuring his ankle at 22:17, but luckily the nature of his injury is not severe.

Pekka Lahtinen, head coach of Finland, said: “I am satisfied, because this was our best match of the tournament. The whole team showed a pretty high level of Volleyball throughout the match. The Czechs were too tired in this game, especially their opposite, so they did not pose a very big threat to us. It is nice to end the tournament in this way”.

Mauri Kurppa, captain of Finland: “Today we played our best attacking game, we were aggressive and we controlled the match. It is a well-deserved victory”.

Petr Juda, head coach of the Czech Republic: “We were very bad in attack, and that was the key of this match. You cannot play defending the whole time”.

Adam Zajicek, captain of the Czech Republic: “We prepared well for this match. I don’t know what happened. It is a pity we did not win, and I am very sorry for that. However, Finland was better in all aspects of the game, and they won fair and square”.

JEQ W: Italy wins home qualifier to get the right to defend their world title