Tough draw for China at FIVB Girls’ U18 World Championship 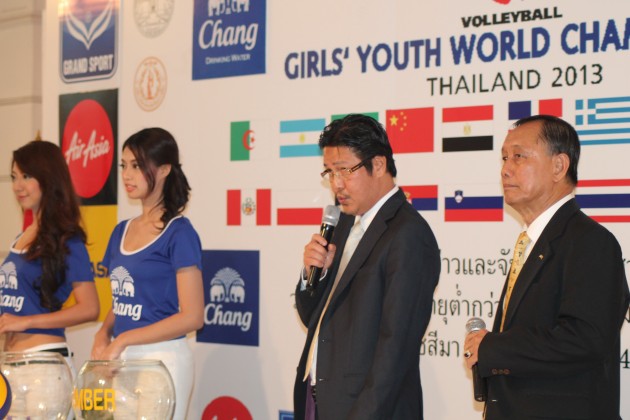 The draw for the pool phrase, which took place at the Imperial Queen’s Park Hotel, was conducted by FIVB representative Ramon Suzara and FIVB Board of Administration member Shanrit Wongprasert. Hosts Thailand and the top seven FIVB ranked teams were seeded. The 20 teams were divided into four pools of five, which will play round-robin preliminaries.

In Pool B, favourites China – who won silver at the 2011 tournament – face up to Serbia, regional rivals Japan, Argentina and Greece.

The tournament will take place in Nakhon Ratchasima, Thailand between July 26 to August 4, and will feature a record 20 teams.

Pool A and C clashes will be held at Chartchai Gym, while the adjacent Liptapanlop Gym will host Pool B and D matches. Thailand face Egypt in the opening fixture on July 26. The lowest-ranked team in each group after the preliminaries will be eliminated, with the top four teams advancing to the second round.

This year’s tournament will be the 13th edition of the Girls’ U18 World Championship, which is held every two years. Thailand has hosted the tournament twice previously – in 1997, and 2009.

Nakhon Ratchasima’s governor, Vinai Buapradit, said the region was well prepared. “We are greatly honoured to host the World Championship and I would like to confirm that we are ready for the tournament. Nakhon Ratchasima’s residents look forward to welcoming you and all foreign guests during the meet,” he said.

Thailand’s coach, Apichart Kongsawat, was optimistic of home success. “Most teams in our pool are Africans and I think we have almost the same standard,” he said. “Pool B might be the toughest draw. I’m upbeat that playing on home soil and with long-term preparation, we should advance to the second round without much effort.”