World No. 24 Korea completed the opening weekend of the 2013 FIVB Volleyball World League with their second win from as many matches and only third victory in 20 World League matches after beating Japan 3-1 in Hwasung, Korea on Sunday, 24 hours after beating the same opponents, ranked 19th in the world, in their opening match of the tournament. 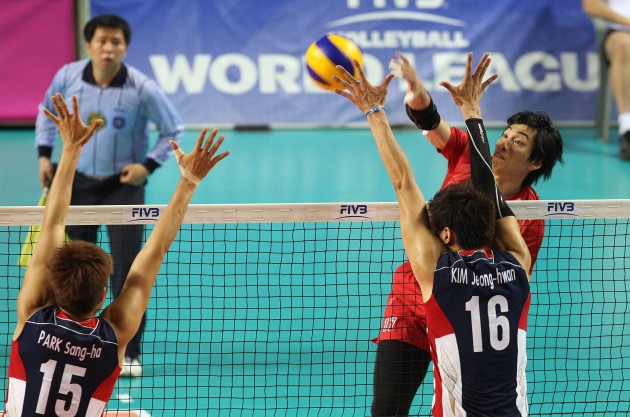 The two victories are the first time Korea, who finished 14th last year having recorded only one win against Italy, has recorded back-to-back World League wins since June, 2011 when they beat France at home and puts Park Ki-Won’s men on top of Pool C with six points, two ahead of Finland with four points, the Netherlands and Canada on three (all three teams with one win and a defeat). Portugal, who registered their first win in 21 World League matches by beating Finland on Saturday, are in fifth on two points while Japan are sixth.

Pool C will be back in action next weekend while Pools A and B will start officially with Russia hosting World League debutants Iran in the opening game of the second weekend in a Pool B clash on Friday at 15:00 GMT followed by the key match of the weekend – defending champions Poland against nine-time winners Brazil in a Pool A game in Warsaw at 15.45 GMT – and France hosting Bulgaria in Montbéliard and Germany travelling to Modena to take on Italy, both games at 18:30 GMT.

The top two teams from Pool A and Pool B along with the winner of Pool C will join hosts Argentina at the World League Finals in Mar del Plata from July 17 to 21.

Highest Scorer by Round