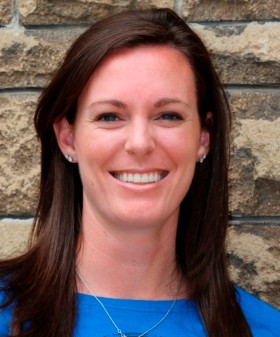 “I have been extremely fortunate to have outstanding, capable people on my staff since the first day I arrived at Saint Mary’s, and that continues with Stacey,” Browning said. “She has all the attributes that we look for in a member of our team and will enhance our already strong program and make it even stronger. We are especially lucky to have her international playing experience, which will bring a new and welcome perspective to our training and preparation to be as good as we can be. What Stacey brings to our program more than anything else is strong personal character, an unquestionable work ethic, and the desire to be great and the discipline to help us get there”.

A 2005 graduate of Saint Mary’s and native of Belfast, Northern Ireland, O’Connor served as a volunteer assistant for the 2010 season before returning to Europe to finish her playing career. O’Connor has played internationally with the Great Britain national team over the past five years, competing in FIVB tournaments throughout the world. She played in European League from 2009-2011, playing throughout England, Western and Eastern Europe. O’Connor played in 59 international matches for Great Britain and was an Olympic alternate for London 2012. Prior to her retirement in July 2012, O’Connor gained experience and furthered her career by playing in Germany (two seasons), Austria, France and Finland. In her last club season, she ranked second in Finland for blocks.

O’Connor has coached Volleyball since 2002 in California and Europe, and has helped develop Volleyball in Great Britain and Northern Ireland through Podium Projects, “GoSpike”, and “Adopt an Olympian”. She was Guest of Honour at the UK Transplant Games Volleyball in UUJ last year. Prior to playing internationally, O’Connor enjoyed a decorated playing career at Saint Mary’s. She is currently second all-time in blocks with 490 total blocks and block assists with 459 at SMC.  O’Connor ranks second all-time in blocks per set, averaging 1.38.  Her 459 career block assists is also second in West Coast Conference history. She was also part of the Saint Mary’s Volleyball team that advanced to the Sweet 16 in 2004 and finished the season a program-best 25-4 and ranked No. 10 in the nation.

If it wasn’t photographed, it didn’t happen:...