WL M: Canada’s captain Fred Winters – We were firing on all cylinders

Canada swept Korea in their second meeting of the third weekend of the 2013 FIVB World League, defeating the team 3-0. Here are the statements made at the press conference by Glenn Hoag, Fred Winters, Sun-Kyu Lee and Ki-Won Park. 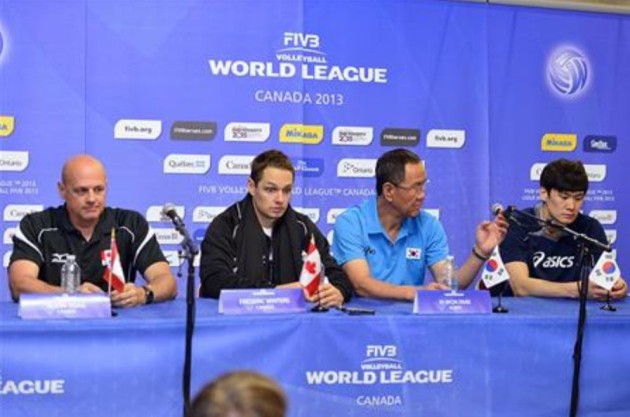 While Canada also came ahead 3-0 on Friday, Korea played better than the first meeting against the home team.

“I’m very happy with the win. Korea played better (than last night),” said Canada‘s coach Glenn Hoag. “We made some tactical adjustments and got some key points.”

“We knew Korea would bring a better game tonight, but we were firing on all cylinders, even when they were beating us, we were composed. We knew we had to win two matches against Korea – it feels great and even better to know we played well,” said Captain of Canadian Team, Fred Winters.

Despite Korea’s efforts, the team was disappointed in the match.

“We had better team work than yesterday, but we regret that we didn’t win,” said Captain of Korean Team, Sun-Kyu Lee.

“We did play better in the serve receive and ran a few more attacks in the middle, but it is very hard against Canada to sustain a run of points,” said Korea‘s coach Ki-Won Park.

WL M: Brazil’s Bruno Rezende – We were better in closing the sets