Although over 2 hours of the play the victory went to NUC (3-2), both teams have lost something: in spite the fact that NUC had won the points it lost the third place and from Volero Zürich fell Mandy Wigger with a serious knee injury. 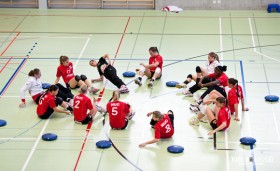 The two rivals met again after the game on Saturday, but this time in front of the vociferous crowd in Neuchatel.

Volero Zürich was also not complete.

Without Olga Sazhina who played in  the Champions League on Wednesday and the others two, Inès Granvorka and Laura Unternährer with the U23 team in the battle for  SM -qualification.

As a replacement for Olga Sazhina came the young Karla Klaric.

Unfortunately, she lacked the experience for such a highly charged game and she could not replace her good enough for winning performance .

Therefore, Svetlana Ilic, in the first set decided to substitute a diagonal player Mandy Wigger in an unusual position.

This change was done immediately, and its effect was that  Volero Zurich equalized to 1:1, and subsequently went into a 2-1 lead.

It was clear that NUC must give the third in the standings volleyball Köniz.

But after it  the good news happened: With the score of 1-0 in the fourth set for Volero Zurich, Mandy Wigger fell so unhappily  that she was drown back from the game with a serious knee injury.

Unfortunately, until  now it is still not clear how serious the breach of the national team and captain is – we wish you a fast recovery Mandy!

Now, again the young Klaric had to return to the field, not only for her, for her cunning skill in the game .

The whole team was in shock and Zurich was not back into the game.

The set was at 25:20 for NUC. In the fifth set as Svetlana Ilic took the last stop gap Aleksandra Petrovic.

The middle blocker used as outside hitter.

Volero Zurich had to admit the defeat at the end of 15:9.

“The defeat against NUC is now irrelevant,” said Stav Jacobi right after the game.

“It was important that our U23 team failed to qualify for the SM in Zurich. Yet, we are hit hard by the injury of Mandy Wigger. We hope that it is not as bad as it seemed, so their use in the national team is not at risk. “

Germany: The engines had to be started first