DOL sets the tone for another exciting season

The Drawing of Lots for the 2014 CEV Volleyball Cup and 2014 CEV Volleyball Challenge Cup took place this morning in Luxembourg City under the supervision of ECC President Riet Ooms and with two neutral observers – Willy Bruninx of Belgium and Patrick Wagner of Luxembourg – in attendance. Read latest volleyball news on Worldofvolley.com. 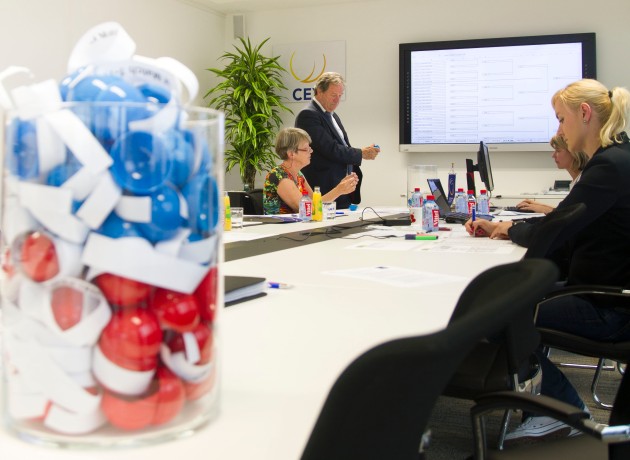 32 teams per gender are set to compete in the next edition of the CEV Volleyball Cup; 16 were pre-seeded as per the latest European Ranking List with their opponents being then drawn out of the remaining 16 teams. The men’s competition sees Italy’s Bre Banca Lannutti CUNEO – silver medallists from last year’s CEV Volleyball Champions League – and Poland’s multiple national champions PGE Skra BELCHATOW as the top contenders for the trophy together with Russia’s Guberniya NIZHNIY NOVGOROD, the real revelation of the 2013 Superleague that is set to celebrate its debut on the European stage by playing Remat ZALAU of Romania in the first round. On the other hand, Turkey’s Fenerbahce SK ISTANBUL looks like the major force to be reckoned with in the women’s competition and will try to improve on their record from the past season where they surprisingly lost the final match to Poland’s Bank BPS Fakro MUSZYNA.

A total of 35 and 28 teams are joining the CEV Volleyball Challenge Cup in the men’s and women’s division respectively. The men’s competition will get started in mid-October with a first round while the ladies will be first in action a couple of weeks later as no first round is foreseen. After claiming silver in the 2013 edition of the CEV Volleyball Cup, Italy’s Andreoli LATINA will try to go for their first European crown thereby following in the footsteps of their compatriots Copra Elior PIACENZA that this past season could write history by sweeping all matches without conceding any set to their opponents. Russia’s Zarechie ODINTSOVO is, at least on paper, the top contender for the crown in the women’s competition. The DOL did also determine – for the complete season – the status of the teams deciding who plays at home first and who plays at home second.

“We are confident that this Drawing of Lots did set the tone for another memorable season” ECC President Riet Ooms says. “The procedure for the DOL did not change much since last year and as usual for the first rounds of the CEV Volleyball Challenge Cup we have tried to take into account – as far as possible – the geographical location of the participating teams so as to avoid long journeys and excessive travel expenses. I think all pre-conditions are there for a very exciting season with world-class Volleyball stopping in many countries as the teams start their chase for European glory”.

“We won the national championship for the first time after many years and for us it is an honour and an obligation as well to participate in the European Cups” stresses the Chairman of Chev DIEKIRCH, whose team is returning to play on the international stage after almost 20 years. Luxembourg national champions will start their campaign in the second round of the CEV Volleyball Challenge Cup playing there France’s CHAUMONT VB52. “We could not ask for a better draw; geographically and logistically speaking this is the best opponent we could get” Wagner says with a smile.

EL W: Hungary ready to host Pool A second round