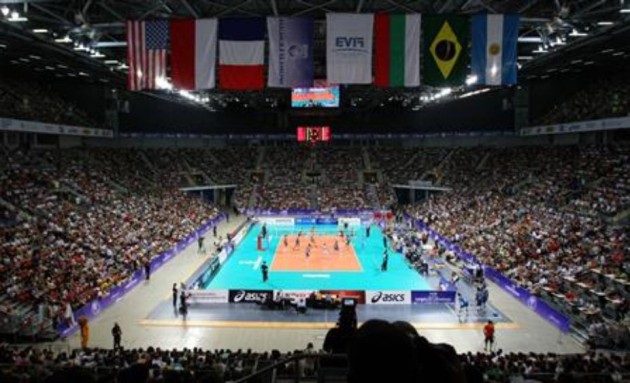 The Bulgarian Lions crushed any attempt of resistance from Argentina, and brought the delight of professional volleyball to the 12,500 fans, which included Members of the Parliament, President (2002-2012) Georgi Parvanov, Members of the Government. FIVB Hero Tsvetan Sokolov lead the team with 20 points to seal the first victory before Bulgarian crowd after an year of expectations.

The bad luck against Argentina from the last year (3 losses) is now looking as a bad memory from the past. Without Matey Kaziyski, Andrey Zhekov, Vladimir Nikolov, Nikolay Nikolov, expectations for this Bulgaria were different. Camillo Placi‘s wise guidance and famous Lions’ spirit brought clear result – nobody should write off them out of big accountancy.

Saturday’s game started fast and furious for Bulgaria at 7-1. Bulgaria’s powerful attack and serve and smooth working block left no chance for Argentina to react. Castellani, Quiroga and Sole tried to make a comeback, but Sokolov was scoring, backed very well by the new captain Aleksiev.

The second set brought more emotions to the crowd for Argentina, as the Gauchos came back from the shocking first part while managing to take the lead in the middle of the set 16-12. Valentin Bratoev made up for the difference with a spike and few serves. Middle blockers Gotsev and Yosifov were the other difference in favor for Bulgaria.

Castellani and Sole worked hard for their team again, but were not able to secure a win for Argentina. Aleksiev never tired, and Sokolov just closed the match for the joy of the fantastic audience.