On Saturday Romania’s national team did delight the home audience in Craiova by edging the provisional leader of prelim Pool A in the 2013 CEV Volleyball European League – Women, i.e. neighboring Bulgaria. Turkey followed up on yesterday’s victory over Bulgaria by edging Hungary 3:1. 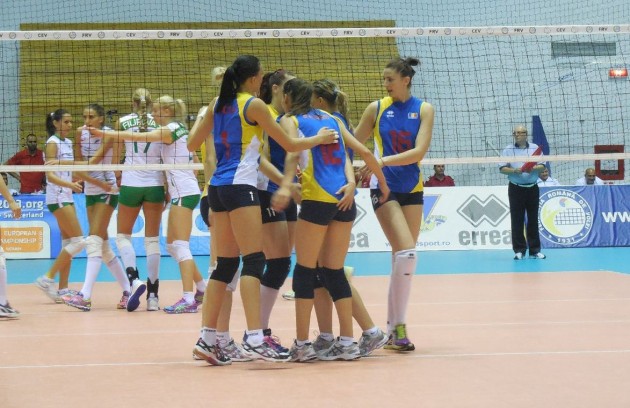 Romania set the tone right from the start dominating the scene in the opening set with setter Diana Calota well marshalling spikers Ioana Baciu and Adina Salaoru. Though Bulgaria did attempt a late comeback with Elitsa Vasileva and Strashimira Filipova, Romania brought it home quite comfortably at 21-13.

Things changed in the second set where Romania initially set the pace of the game (7:3) before Bulgaria fired back going up 14:13 with Vasileva paving the way for the final 21-16 and 1:1 in sets.

The third set did follow a similar plot with Vasileva and Filipova who contributed a real Volleyball show for Bulgaria and did anchor their side to the final 21-17.

Romania found their way back into the game with Salaoru and the blocks by Nneka Onyejekwe going up 7:1 and 14:7 in the fourth set, thereby paving their way for the tie-break (21-17). There Romania started out strong (5:1, 10:6) and did resist to a comeback by their opponents to finish the deal at 15-10 and cash their second victory of the weekend.

In the other match of the day Turkey followed up on yesterday’s victory over Bulgaria by edging Hungary 3:1 (15-21, 21-17, 21-15, and 21-18) after displaying – with the only exception being the first set – solid Volleyball in all fundamentals. With this result Turkey consolidated their third place in the charts (12 points) and remains in contention for a spot in the final four scheduled for mid-July in Varna, Bulgaria.

WL: Another thriller in Finland with same...