Portugal added three precious points in its path towards the top of the Pool C classification by defeating Japan 3-1 today at the competition hall “Multiusos Guimarães” in the 5th weekend of the 2013 FIVB Volleyball World League. Valdir Sequeira, Alexandre Ferreira, Tatsuya Fukuzawa and Yu Koshikawa were the top scorers. 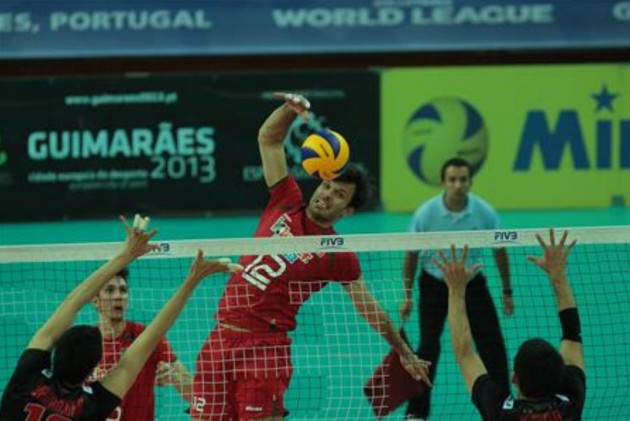 Valdir Sequeira (21) and Alexandre Ferreira (20) were the best scorers of the match, while Tatsuya Fukuzawa and Yu Koshikawa, both with 17 points, were the top scorers for the Japanese. The attack and block were decisive in the match, with the home team superior on those two skills.

Japan started the match well, with their attack causing problems for the Portuguese block. At the 1st TTO, Japan was ahead by 8-6, but two points from Alex Ferreira (attack and block), an ace from Nuno Pinheiro and a spike from Valdir Sequeira (10-8) forced Japan coach Gary Sato to ask for a timeout. Another ace from the Portuguese setter increased the pressure (12-8) on Japan and, at the 2nd TTO, the home team led by four points. Japan recovered soon after, led in the attack by Daisuke Yako and Yu Koshikawa, but a block from Marcel Gil renewed Portugal’s confidence (20-16), and closed the set winning (25-22).

The second set was much less balanced. Portugal led at the 1st TTO, with an attack from Joao Jose at the first touch (8-7), but Japan took the lead through an attack from Koshikawa (11-9) and increased the gap in the score (14-10). The growing confidence of the Japanese team, showing an improved attack and block (24-18), was rewarded with the triumph in the set, (25-20), scored by Koshikawa in the attack.

Japan maintained its momentum in the third set, with Gary Sato’s team leading (3-1, 8-7). Portugal took the lead with two points from Valdir Sequeira (11-10), but Japan charged again (13-12) led by Tatsuya Fukuzawa, who scored the 16th point (16-13). Supported by their home crowd, Portugal recovered (19-19), but Koshikawa scored his 15th point of the match on another ace and retook the lead (21-19). The tie at 22 kept everything open, but Alex solved the question with a point in the attack and another in the block (26-24).

Portugal came out strong in the beginning of the 4th set (5-1), but Japan responded with the orientals traditional patience (5-5). Valdir was much less patient, and scored four consecutive points (11-5). Unstoppable, developing a joyful and effective game, Portugal sped up (17-7) towards a triumph that rewarded their attitude and unconditional support of the crowd (25-15) with an ace from Andre Lopes.

Flavio Gulinelli [POR coach]: “We gained confidence with the victory in the third set and, in the fourth set, the quality of our sideout was already very good. We failed many services, but that is the tax that we have to pay if we want to win. And we knew that we had to play very well against Japan, which is a good team.“

Joao Jose [POR captain]: “Japan is a very complicated team, since they make very few errors and their block/defense works very well. The third set was crucial since it gave us confidence and showed us what we have to do to secure the three points, which was our goal.“

Kota Yamamura [JPN captain]: “We played very well in the second set, but we accused the pressure in the third one. Today, we learned many things and I believe that we are going to play better tomorrow.“

Gary Sato [JPN coach]: “Congratulations to Portugal on their victory. They played very well and we didn’t. We are going to rest and prepare for tomorrow’s match. We have to make some adjustments, since I believe we can play much better.“