Canada fended off its second-day jinx and downed Finland 3-0 on Saturday in the Tampere Ice Arena. Dallas Soonias, Fred Winters, Olli Kunnari and Matti Oivanen were the top scorers. 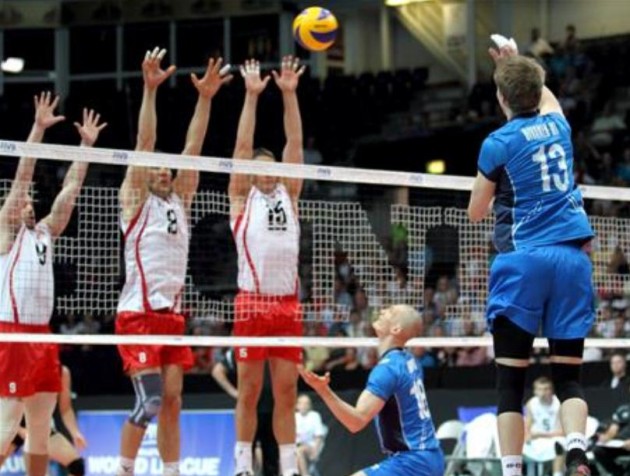 The maximum six points from two games in Finland makes Canada a strong challenger to the Netherlands for the one place in the World League finals reserved for a Pool C team. It was the first time Canada has recorded six wins in a single World League season beating their record of five in 1999.

The crowd of 3,950 saw that Finland’s blocking could not match the raw power of Canada’s left side hitter Gord Perrin who finished with 18 points, also pitching in three blocks. Right side hitter Dallas Soonias was his dangerous self and went on to make 17 points, while team captain Fred Winters contributed with twelve, and a solid reception game. Josh Howatson set up many points well. Libero Daniel Lewis showed sensational positional sense, enabling him to a dozen good digs.

For Finland, Olli Kunnari had 12 points, and Matti Oivanen nine.

After two tight sets won, Canada let loose in the third and raced to lead 8-2 and 16-6 at the technical time outs. From 18-8 on, Canada matched every single Finnish point with one of its own until getting match points at 24-15.

Canada managed to steal the first set after Finland led 8-6 and 16-14 at the technical time outs. Tall middle blocker Konstantin Shumov, not much used, finished well on quick sets. Soonias started to show up after a quiet start, and together with left side hitting colleague Perrin he dragged Canada up and past. Finland crept to tie at 23-23, but a one-on-one block  gave a set point which Finland lost on a three-meter line infringement, giving it to Canada 25-23.

Soonias and Perrin continued scoring in the second set, five points each, and towards the end Canada could make it a three point lead. Perrin’s power and a two-man block by Howatson and Adam Simac led to a set point finished by Simac.

Winning two close sets gave the Canadians a boost, and they played in good spirit racing to a 7-1-lead, and 8-2 at the TTO. The margin increased to 16-6 at the second TTO, and there was no stopping the North Americans.