France ended Brazil's perfect run in the 2013 FIVB World League with a 3-1 victory on Saturday in São Paulo´s Ibirapuera gymnasium. Earvin Ngapeth and Ricardo Lucarelli were the top scorers. 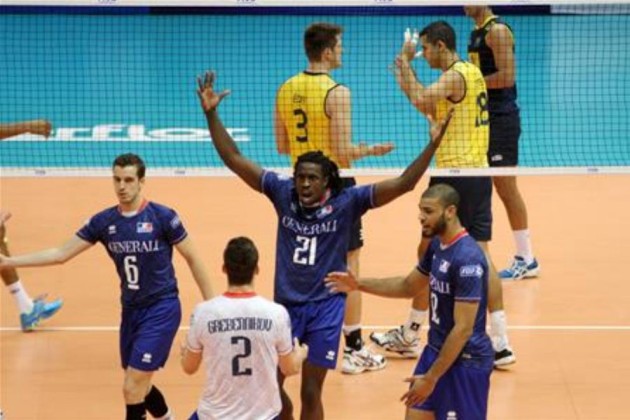 With the win, Brazil reaches the top of pool A with five wins and one loss, and France falls to fourth, with three wins and five losses.

In the beginning of the match, setter Bruno Rezende’s serve gave Brazil the lead (6-4). The French then stepped up their serves and blocks, and the Europeans jumped ahead (11-9). They then streaked ahead with three points in a row. However, Brazil got back in the set and tied the score (24-24). With a block of middle blocker Le Roux, France took the set 29-27.

Brazil jumped to an 8-6 lead in the second set. Good defenses and serves got the Europeans 18-15 in front, but Brazil’s excellent performances of setter William Arjona and opposite spiker Leandro Vissotto, gave them a close and exciting set 25-23.

France got better in the third set going 9-6 and 16-13. Brazil improved in the end of the set but the Europeans hold the advantage and won the set 25-22.