The very last round of preliminary action in Pool C is coming up this weekend at Olimpiets sports hall in Mogilev. This and other volleyball news read on Worldofvolley.com. 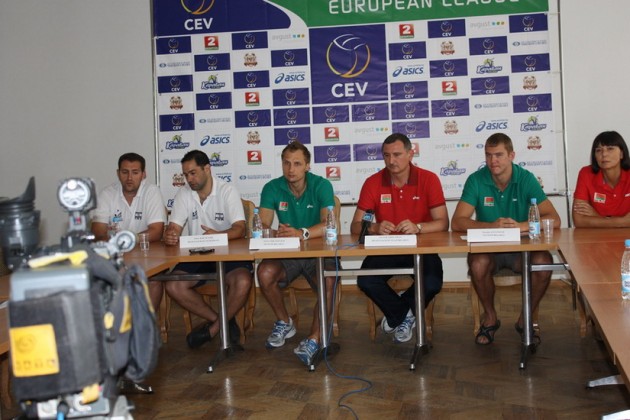 Croatia – the current leaders with 22 points – will try to keep first place in the group in order to advance to the final four scheduled for July 13-14 in Marmaris, Turkey, while the hosts of Belarus will try to seize three wins in order to keep alive their chances to make it to the final stage of this year’s CEV Volleyball European League.

A press conference was held on Thursday at local hotel “Mogilev” with players and coaches from Belarus and Israel as Croatia was busy with a training session and Turkey was set to arrive only later in the evening. “The European League is a valuable experience for us” said Israel’s head coach Zohar Bar Netzer. “We did not start that good but we have many young players in the group and the European League is their first international competition of this calibre. However, in the second and third rounds played in Israel and Turkey we performed well. I have decided to invest in young players and those with more experience are out. After we edged Turkey and Belarus, I think that my reputation has improved back home in Israel. I hope we’ll continue the same way also here in Mogilev”.

“Before the start of the European League our expectations were really high and we made no secret that our intention was to qualify for the final four in Marmaris” Belarusian mentor Viktor Sidelnikov said. “Though we did not live up to our expectations, before the start of the last round, we still have our chances to make it to the final stage of the competition. Croatia has got an advantage but we’ll fight until the end, especially as we play before our home fans. We know that here in Mogilev we always get great support from the spectators”.

Questioned about the possible appearance of his superstar, Aleh Akhrem, Sidelnikov said: “I know that many fans and journalists are waiting for him to play here in Mogilev. Aleh travelled with us last week as we played in Turkey; he’s a real professional and in a good condition but needs time to adjust to the team. We have got some problems to identify our ideal starting six and these must be solved in time before the European Championship. The European League is a very good opportunity to test a wide range of players and give everyone the chance to show what they are capable of”.

“I think that this will be the most interesting weekend for our Pool. All four teams have come here with the ambition to win. As for Belarus, the key will be our game with Croatia. We need to take our revenge for the defeat we suffered in Rovinj as we played there the first round of the prelims” Sidelnikov concluded.

ECH M: “We must be focused against...