Lauren Paolini scored 12 points off the bench to help USA seize its second consecutive win over Japan at the USA Volleyball Cup 3-1 in front of 3,500 fans at the Walter Pyramid on Friday. Lauren Paolini, Kristin Hildebrand, Kelly Murphy, Nicole Fawcett, Mizuho Ishida and Miyu Nagoakoa were the top scorers. 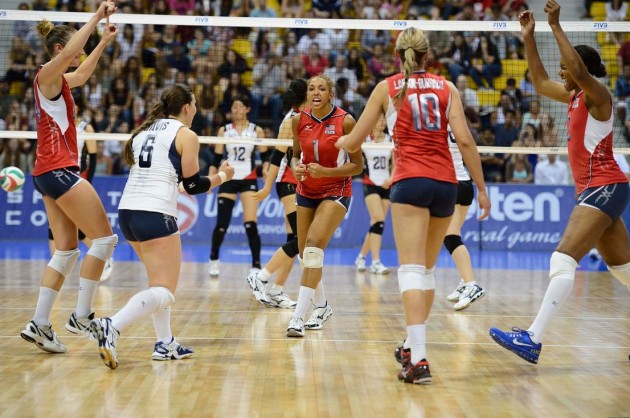 Paolini was credited with 10 kills on 19 attacks and two blocks. Kristin Hildebrand added 11 points while team-mates Kelly Murphy and Nicole Fawcett scored nine points each playing at the opposite position.

Japan was led by Mizuho Ishida and her 18 points, while Miyu Nagaoka produced 15 points in the loss.

USA  are ranked No. 1 in the world and won the silver medal at the 2012 Olympic Games. Japan, ranked No. 3 in the world, captured the bronze medal in London last summer.

USA controlled most of the opening set to win 25-17. In contrast, Japan led the majority of the second set in building a 21-17 margin. However, Fawcett went back to serve and four straight points to knot the score at 23-all. After the Americans saved one set point, they closed out the frame with a 26-24 victory to go up 2-0. Japan pushed out to an early 10-6 advantage in the third set and did not allow the Americans to rally in winning 25-18. In the fourth set, Japan battled back to within one at 19-18 only to have the U.S. score six of the final eight points for a 25-20 victory.

“In one word I think we are resilient,” Fawcett said. “We have been put into some difficult situations and we haven’t put it into a negative light. We are working as a team with one goal.”

Davis concurred with Fawcett in the team’s mentality.

“I think we are resilient as a group and that makes it easy make adjustments,” Davis said. “Japan began tipping and we were able to adjust. In the second set we got down and fought back. To do that this early in the quad is a very good sign.“

BRA W: Brazil wins two in a row over Netherlands in friendlies