BRA W: Brazil wins two in a row over Netherlands in friendlies

After winning its first match in the series of friendlies against Netherlands last Thursday, Brazil relished its home court advantage and took its second win 3-1 at Ginásio do Sesi on Friday. Gabriela Braga Guimaraes, Monique Marine Pavao and Juciely Cristina Baretto were the top scorers. 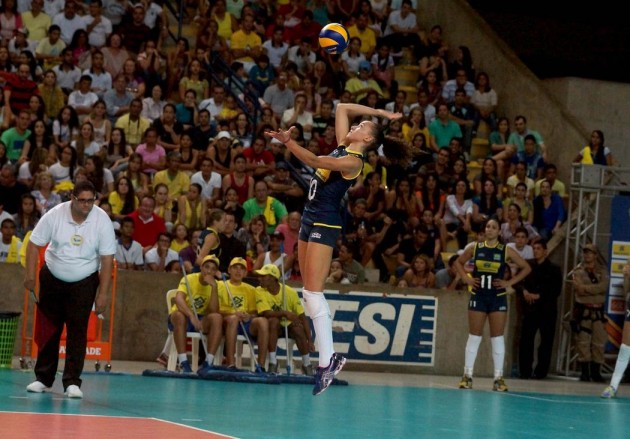 The victory became Brazil’s eleventh consecutive win of the season in preparation for the FIVB World Grand Prix from August 1 to September 2.

The match also marked the debut of 19-year old outside hitter Gabriela Braga Guimaraes (Gabi) who hit 16 markers and was the best scorer of the match. Team-mates Monique Marinho Pavao (Monique) and Juciely Cristina Baretto (Juciely) scored 15 and 14 points, respectively.

The Netherlands took another first set win 25-23 capitalising on a shaky start from the Brazilians but Brazil cruised into the next three sets with Gabi leading the way on the attack. The young hitter stood with an excellent debut and played without any pressure considering that she is with a powerhouse lineup.

“I am very happy Zé Roberto gave me an opportunity to play,” Gabi said. “I think I enjoyed (the match) very well. In the second set, we played a good game. The important thing is that we ended the match with a victory. It was great to be among these great players.”

The last match of the friendly matches between Brazil and Netherlands will be on Sunday, July 14, at the Ginásio Nélio Dias in Natal, Rio Grande do Norte.