The Argentine Seniors' Men Team is already in Mar del Plata training for the FIVB World League Finals that will take place in this resort city starting on Wednesday, July 17th to Sunday, July 21st. Pools A and B are still playing this weekend their last Intercontinental Round to qualify for the Final Round. Italy was the first foreign team to arrive. 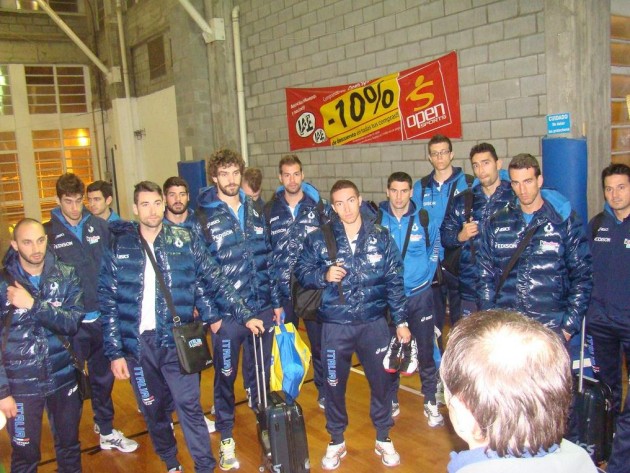 This Friday about 20.00 the Argentine delegation arrived to the hotel where all six teams will be hosted. “Mar del Plata always welcomes us very much. We feel very comfortable here” was the common expression of all the Argentine Team people in their first meeting with the Media at the Hotel Lobby, as soon as they left the bus. And of course, the light blue – white national team is at home, where they expect to give their utmost to end as high as possible among the best six teams of the World at the most important annual competition organized by the International Volleyball Federation.

The National Seniors were welcomed by the Local Organizing Committee members, who gave the coach Javier Weber a plate remembering this historical event. After the official presentation in charge of Andres Maccio, Final Six Competition Director while the welcoming words were given first by Pablo Fernandez, in charge of Mar del Plata Tourism, who expressed “pride” for the city that “welcomes them” knowing “that the best volleyball level will be seen” without forgetting the chance that the city “will have the chance to be seen by the world once more through out sport and in this particular case, the best international Volleyball.“

The President of the Organizing Committee, Horacio Tacoone, who is also the head of Deportes Mar del Plata, added its welcoming and expressed his personal belief that the team is heading towards an historical chance. “Aside from all what has meant volleyball to the city during the last several years, personally I believe that you are in conditions of obtaining an historical result. I hope you can do it in Mar del Plata during this Final Six competition. But if it is not so, not here and not now, I am convinced that you will obtain such a good result in the near future. I congratulate you and I you can be sure that the whole city support you.“

Closing the official welcoming ceremony, the captain of the Argentine Seniors‘ Luciano De Cecco, talking in the name of the team thanked the great and warm welcome. “We are very thankful for this welcome, for the welcome words and very happy for the chance to face the best teams of the world in this city that always receives us so warmly” expressed De Cecco.

The Argentine Seniors‘ will train for the first time in Mar del Plata during this morning at 10.00 at Club Atletico Once Unidos, with weights and training afterwards. During the afternoon they will head towards the Pan American Sport Centre where an exhibition will take place as result of the outstanding success of their visit to Mar del Plata last May. At that time over 3,000 children of different schools and local clubs watched the team playing. This Saturday the Argentine team will also offer an exhibition.

It will be as part of the evening training, at 17.00 at the Pan American Sport Centre “Islas Malvinas” with free entrance for all the audience. It will be the last open presentation of the “light blue – white” team prior to their debut at the Final Six next week. At the same event, all the organization of the Final Round will have a general rehearsal including volunteers, score table and board & statistics & and other staff working during the five days (July 17th – 21st). The competition depends not only of the teams but also of a perfect organization with all needs fulfilled.

The Italian delegation, winner of Pool B at the Intercontinental Round of the FIVB World League 2013 was the first team to land this Friday in Mar del Plata. They arrived about 16.00 and at 19.00 they worked on their first training at IAE Club facilities.

There, all the delegation was officially welcomed by Andre Maccio (Director of the Competition), Horacio Taccone (President of the Organizing Committee) and Oscar Ben (Treasurer of the Buenos Aires Province Volleyball Federation).

Some of the delegation people received a book about Mar del Plata and a plate remembering their participation at the Final Six 2013. Training was viewed by several young girls that also play volleyball in different teams of that venue.

WL M: Camillo Placi – It was a match with two faces

ARG M: Next steps of the Argentine...