It took five sets to conclude the game between Finland and Belgium at EYOF 2013. It was one of those thrilling matches in which the underdog gets back into the game, but still looses in the end.The first two sets were Finland’s. Though the Belgians didn’t give in easily, the Finnish men dominated and won the sets, 25-22 and 25-21. 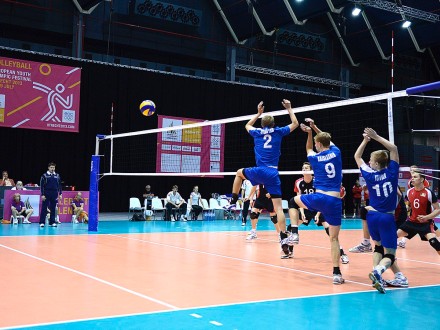 The third sets things were turned upside down. The Belgians got a grip of themselves and put pressure on the Finn. They won the third set, 19-25. The Finn had a strong start in the fourth set and when the set was half over they seemed to win the match. But the Belgians didn’t give up the fight. There were some beautiful rallies and they cam back from 17-12 tot 22-22. They even won this set, 22-25: the score was 2-2.

The fifth set initially was a tie. Bit the Finn made less mistakes and took the lead, 11-7. A gap the Belgian were unable to bridge. After a good block Finland had a match point at 14-10. The Belgian scored two good points and it became close again. But via a ball that was hit out, but touched according to the judge, the match came to an end in favour of the Finn: 3-2.

WL: Competition set to get stiffer on day 2

Mayor of Urmia about Marouf and Zenit:...